Bullshit Narrative 11-The Shooter [Any Shooter] Was Mentally Ill. 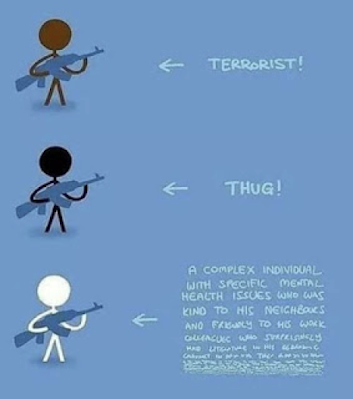 This is the argument that just keeps on sucking.

When people blame mental illness after each shooting (especially if the shooter is white), and then do absolutely nothing at all to try to improve the deplorable state of mental health in this country, what they make very clear is that they're not even kind of sort of maybe fooling THEMSELVES with this half-assed derailment. They know full well this is not the X factor in these cases. They just want to point at something (anything) it could be other than guns.

It's called scapegoating and the mentally ill have been on the shit end of it basically forever.

Look, it's easy to see someone commit an atrocity that is horrific beyond imagining and think that no one in their right mind would be capable of doing something so horrible.

It's easy to imagine that simply the fact that someone did this MUST mean they are insane. There must be something wrong with them, right? But it's a comforting lie. (There is something wrong with them, but it's not mental illness.) At best that's simply NOT ACCURATE. And at worst it is ableist as fuck and scapegoating bullshit that leads to the worst sort of stigma, prejudice, and bigotry.

Claiming all people who would do this are mentally ill simply displays a breathtaking ignorance of what "mentally ill" means in a clinical (and meaningful) way, and is used almost exclusively as a dodge to avoid talking about what else might be involved in the calculus.

Every other factor from gender to easy access to instantly lethal, long range, high capacity weaponry is excluded from the diagnosis so that folks who don't want to have tough conversations can just further stigmatize those who actually have mental illness and go on about their day.

"Welp. Musta been crazy. Can't do anything so terrible if you're not crazy. Nothing to be done but arm teachers or something. Has the new season of Daredevil dropped yet?"

And this is particularly revolting and full of splash damage onto folks with genuine mental illness when the definition of "mental illness" becomes "anyone who would do something like this."

(That's not really a clinical definition by the way, and over half of mass shooters are found to be mentally sound. It turns out the term "mental illness" has an actual meaning.)

Why mental illness factors so prominently in gun violence statistics is when SUICIDE is factored in. Turns out, like most other deterrent logic, people are less statistically likely to kill themselves if they do not have easy access to a way to do so quickly and effectively.

But hey, if this ACTUALLY led to a conversation about better access to mental health that would be great. I'll spoil the ending for you, though. It won't. Because that's not why people talk about mental illness after a shooting. They do it so they don't have to talk about guns, and they don't care that they are increasing the stigma for folks around them who suffer from mental illness.

Bullshit rating: This bullshit will suck your shoe right off your foot if you step in it, it sucks SO much.