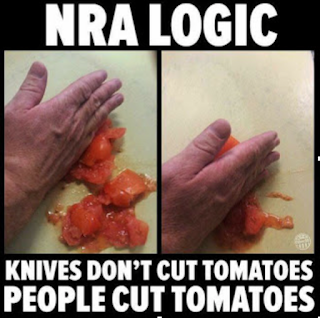 That's why we don't want to do background checks on the guns, Turbo. Because you're leaving out the last line. "But people with guns kill people a LOT more quickly and efficiently than without."

[Note: I'm going to format all of these articles when I'm done with "next" and "previous" links and a link back to the original post where I'm linking out each of the narratives. But bear with me while I get them all written and posted.]

This is one of those arguments that sounds deep and hella profound if you're twelve and then completely falls apart as soon as you start to think about it with the reasoning skills of…like…a thirteen-year-old. It just takes the place of an actual argument chiefly because it's just really easy to remember, has that slick rhetorical device of repetition, and looks good on a bumper sticker.

No one is looking to regulate guns because they come to life like the brooms in The Sorcerer's Apprentice and kill people by themselves. Every weapon requires human action to kill people unless it's a claymore that's been stored at the top of your closet and you're not paying very much attention as you go frantically searching for the box you stored your original birth certificate in.

The reason we're thinking (some) guns might need regulation is because they enable would-be-killers to kill a lot people really, REALLY fast and from really, REALLY far away. It's the same reason we want to stop Iran and North Korea from having nuclear weapons instead of saying with a dismissive shrug, "Nukes don't kill people. People kill people."

People do kill people. But this is not actually a major plot twist. People have been killing people, using tools to make killing easier since the first sharpened stick and heavy rock. Guns make it a LOT easier for them to do so, and CERTAIN guns make it absurdly easy. So much easier even a toddler could do it. (Ironic voice "Hashtag: Wish I were kidding.")

Do you know the reason assault weapons kill six times as many people in mass shootings? It's not because those people are inherently deadlier or have a greater will to kill people. It's not because "people kill people" but those people just happened to WANT to kill more. It's because those weapons are better at it. They kill a lot of people very quickly. They're easier to reload, fire bullets faster, and are more accurate at range.

No one is actually saying that humans aren't involved; this is just straw man bumper sticker bullshit. Attempting to stop all deadly violence was never what gun bans were attempting to accomplish. Keeping the MOST dangerous kinds of weapons out of the hands of people who haven't been thoroughly vetted is.

Bullshit rating: Seems deep, but is actually super shallow. Sure is a lot of it though.