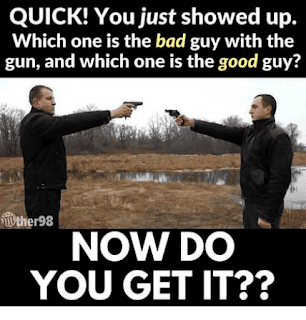 Previous Bullshit Argument: "The Problem is [Some Bullshit That it Clearly Isn't]."
Or all the way back to the menu.
Actually, statistically, they stop themselves, but why ruin a good rhetorical anaphora with things like facts.

It's weird to use this one after an event where the shooter just walked off the site to go get a drink at Subway and hang out at Mickey D's. A good guy with a gun did not stop this one. It just ended.

Or more recently where the shooter cruised in past the armed security that was on campus and put that whole narrative to the lie. Or the cops standing outside the school in Parkland.

But you know what, okay. I'm sure they mean like the good guy who was actually there? Or there? Or that other place? Oh and that one time the guy totally did––except....well....yeah.

But wait…there was that one actual time out of…checks notes…hundreds.

No? Okay, let's assume this means that in most cases, once a shooting is underway, it is unlikely to end in something other than a shootout with law enforcement...even though actually that's not true either and most of them actually either just END or end in a suicide.

But HOLY SHIT does it take a lot of willful obstinacy to begin a narrative at the moment the shooting starts like nothing anyone could possibly have done would have had the slightest influence up to that point.

That's like saying only an engine overhaul can fix a seized up engine that has caught fire. I mean it's technically sort of true. Like once the car is on fire from the pistons grinding the cylinders, okay; you have to overhaul the engine. Yep. No getting around that. But acting like changing your oil is some pointless endeavor because engines "just seize up" and once they do, there's no possible way to fix them except for overhauling the engine....that would be a completely outrageous position, and so is the idea that we can't have a conversation about how to prevent gun violence that traces a single causal factor prior to the first shots being fired.

And tell me....what does a bad guy with a gun even look like?

Bullshit rating: What the hell has this bull been EATING?