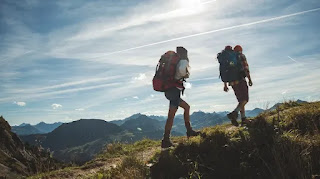 Several questions had some kind of variation on this theme, so I kind of combined them into the Power Rangers Megazord of answers. ♫♪♪Go, go, power question! ♫♪♪

This has a handful of answers because "favorite" is so hard to pin down.

My favorite common local hike is around the Lafayette Reservoir. There's a paved trail that hugs the water pretty closely and a ridge trail that goes up and down the hills around it and has some great views. I like this one because it's fairly close, has great views, and I can configure it to be between 45 minutes (inner trail) and 2.5 hours (ridge trail). It's a lovely hour (or three) and it's close and convenient. I used to do it once or twice a week when I lived there. Now it's more like every month, but I still make a point to try.

My favorite local bigger hike is Mt. Diablo. It's got gorgeous views and vistas. But it takes an ENTIRE day—between ten and twelve hours usually— and it is a very strenuous ascent. I usually do this once every couple of years, but I really enjoy it when it happens.

Moving out of town, I enjoy spending time on the beach just watching the waves come in. I could do that for hours. There are a lot of hikes north or south of San Francisco that end on a beach or go along a beach. I was recently introduced to a hike along the topside of a cliff that winds inland and then back down to the beach where there's a waterfall (Alamere Falls), and I really, REALLY like that one.

I enjoyed Burning Man for many, many years. There was a profound quietness in my soul that I felt keenly when I was far beyond the city at some strange art installation with a long distant thump of EDM bassline pounding gently through the dust-blown air. If I could somehow separate those deeply personal moments from the entitled libertarian dillholes who have turned Burning Man from the hippie drum circle of love with funky art that it was into one of the most exclusive week-long partys on Earth, I would still be going.

In terms of parks or BIG areas, no question that the answer is Yosemite. I don't love the summer crowds, but there is no nook or cranny of that entire park that isn't just….majestic AF.  There are a lot of wonderful parks and I live in a place on earth that is particularly thick with spectacular nature, but that one is the one I want to go back to constantly. It's unfortunate that even a no-frills trip requires several hundred dollars plus lost income. I'm on a shoestring budget (and that's when I'm NOT trying to pay for cancer treatment), and it's something better done with some kind of camping buddy, so it tends to be a treat every few years.

8- When are you coming back? I mean I know you're not GONE gone, but clearly you've been out of it for a while.

I'm going to slip in this between the non-writing questions because it's kind of on the edge, and it's coming up a bit recently as folks all over are wondering why the posts are coming so slowly and patrons are reassessing their budgets—especially for any content creator who isn't producing much right while inflation rages. Besides, then I get to make some kind of "slipping it in" joke, and we all know I live for those.

A lot of my patrons know this already because I keep them up to date on what's going on behind the scenes. It's taken me a few months to recover from having cancer and a major invasive surgery to have a softball-sized tumor removed. I was very close to some REALLY huge problems. I got out of having to do chemo by the skin of my cliché and walked away with a diagnosis of a genetic disorder that will predispose me to certain cancers and means a lifetime of screenings. My body mostly recovered in about six weeks. My mind has taken a lot longer—both to get over the medical trauma, feel SAFE again, and wrap my head around my Lynch syndrome. There have been bouts of depression, severe anxiety, signs of medical trauma, and intense psychological symptoms ranging from difficulty concentrating to inability to sleep for days at a time—all of which affected my writing. It's been a real hoot.

I've crawled back to semi-functional, but the emphasis is on CRAWL.

It would probably have just been better if I'd put the blog on hiatus for three or four months—just taken that time off and tried to pick up the pieces of whatever was left when I got back. I think most people would have understood, and there would be less resentment from the audience for a pause than for the same amount of time struggling, missing posts, weird off-topic posts and what was perceived as malingering indolence.

It probably would have caused me less stress too. As it was, every post I missed and every week I tried but failed to return to a regular posting schedule, felt like one of a thousand papercuts.

Instead I worried about lost income from my crowdfunding, so I kept trying…and failing. And while I can look back on a long enough timeline and say, "May was better than April, and WAY better than March…" I think that suiting up and showing up and then absolutely falling on my face was probably a worse optic (in terms of patrons, certainly, but also just in general) than simply taking the time off.

It wasn't that I was wrong about being able to write when I felt like I could write. I was actually doing a pretty good job of self-assessment during those times. It was that I was SO SO SO brittle from the cancer and the surgery and one of my partners' difficult breakups (and before all that, a devastating miscarriage) that I kept getting knocked back to square one and losing days to anxiety or depression.

So let this be one of my lessons to you from the real-time advice of Chris the Writer—a lesson in what NOT to do. Don't try to dribble SOMETHING out. It's not worth it. That's just going to irritate people who think you should be over it already, confuse people who aren't keeping up enough to know what's happening, and remind everyone else over and over of what you're NOT accomplishing. Just try to evaluate how much time you think you need (and then probably double that time you picked to be safe) and go silent. Those determined not to understand never will. Those whose generosity cannot be broken won't give up on you. And those in the middle won't be reminded over and over (and over and over) that you are falling on your face.

9- If you had the opportunity to take the time (and invest the time) to learn how do something, what would that something be?

I would learn to play the Celtic harp. As it is, I am trying to find one I can use/borrow for a while, so that I can see if it's a flash-in-the-pan interest or a hobby that will stick, but I was really excited about it last year around this time before everything started to explode, and that interest has come back now that I'm feeling better and life is slowing down enough to make room for some leisure and hobbies.

A very very very close second would be learning fluent Spanish. I can follow a slow and easy conversation, but it's been years since I've really practiced and worked on it, and I would love to just be able to converse or read Spanish literature. (Like I know I run an irreverent blog that literally goes out of its way to use the word FUCK a little too often, but I'm a literary nerd at heart, and to be able to read Cien Años de Soledad, El Túnel, or Ficciones in their original language….**deep sigh**)