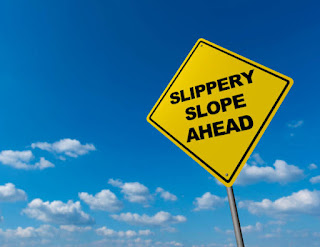 You know you're in bad argument territory when the argument people are non-ironically advancing has the same name as the fallacy that its poor thinking is named after. Like when people say: "We can't do that because it's a slippery slope," LITERALLY invoking the name of a logical fallacy to make their argument, you absolutely know that what you're about to hear is not going to be a good argument.

You want to know how I already know folks have a water's edge somewhere about what kinds of weapons civilians should have access to? Because they're not reading this from their armed M1 Abrams or their fully functional Apache attack helicopter. Because they might own a whole panic room full of assault style rifles, and maybe even a few M203 grenade launchers, but they probably don't have an M141 shoulder-mounted anti-structure weapon (or if they do, they know they could go to prison for having it—and not for a couple of days). They don't have a bunker buster they can launch from an A-10 Warthog. They likely don't have the howitzers that the Continental Army used against the British during the American Revolutionary War either. Or an Ironside ship with functional 24-pounder cannons.

We already draw the line somewhere and say "Okay, there's no need for any citizen to own this weaponry. We want ordinance like this to be in the hands of carefully vetted people who use it only when absolutely appropriate (and not without some measure of oversight)." And for 240+ years, we've managed to have conversation about where that line should be, so acting like bump stocks simply MUST be legal or all liberals are coming for all guns is the worst kind of fallacy imaginable.

Not every conversation is intended to erode gun rights with the end goal of total banishment. I'm sure SOME liberals will keep going, but like most of the history of this country, most will lack the political momentum once there is an equilibrium.  One the compromise doesn't involve accepting dead children on the 6 o'clock a few times a year, there won't be momentum. Unless of course there can't BE a compromise….then the momentum becomes a buildup and the backlash a flood.

Sometimes we just need to talk about the fact that the line in the sand seems to be a little misplaced.

Bullshit rating: You didn't slip in the bullshit. You just pretended to so people wouldn't think you didn't notice it.