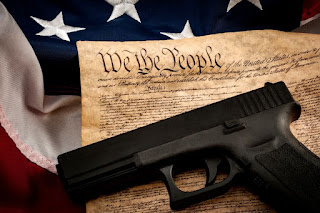 We get to bear arms. And the Supreme Court has even ruled that the second amendment applies to personal firearms and not just....um....well-regulated militias. Unlike many, I don't imagine that I know more about constitutional scholarship and legal jurisprudence only when I happen to disagree with a SCOTUS outcome. There are rulings I have strong objection to, of course, but I don't imagine I am better able to decide if they are constitutional.

The problem with making "The Second Amendment" the sum and substance of an argument (or counterargument) against any kind of gun control is that it (deliberately) ignores so much space between "Free, unrestricted access to grenade launchers" and "Ban them all." "The second amendment" is trotted out AS an argument chiefly when the slightest call for nuance or compromise or sensible regulations is thrown into a false equivalency of outlawing all guns, all types of guns, everywhere, for all time.

We already HAVE a waters edge for what kinds of weaponry a citizen can legally own. And that line is somewhere between revolutionary era Charleville muskets and "if you can afford a Tomahawk missile, it's yours." We're just having a discussion about whether that line needs to be moved.

It's patently absurd, disingenuous, and intellectually bankrupt to assume that someone who wants better background checks and more rigor around bump stocks and extended magazines is "no true American" and that they simply want to burn the constitution. Hiding behind that level of rhetoric is pretty much the silencing tactic of someone too cowardly to have a conversation about what compromise might actually cleave to the ideals envisioned by some dudes with long rifles without giving one angry man a military grade arsenal to level on school children.

It's worth mentioning the following to everyone who—with a single tear running down one cheek—looks at the eagle perched on the Stars and Stripes and says with voice wavering from the jingoism that carrying a firearm is their inalienable human as an American:

As a civil liberty, the second amendment was conceived of as and continues to have a magnitude F-5 racial double standard. The second amendment is for white people. It was conceived so explicitly and continues to be so in practice. Black folks get shot in the back for having B-B guns in open carry states, and POC armed in any way are essentially arrested by law enforcement for walking down the street no matter what the local laws are. White people, on the other hand, take selfies in Walmart sporting their M-14s.

Usually the same white people who wonder what "white privilege" is, but that's probably another article.

Also it would be nice if the folks most likely to cite the second amendment cared about the other nine in such a substantive way, but that's probably another article too.

The NRA was conspicuously silent when Philando Castile was shot where concealed carry is legal basically for informing an officer that there was a gun in the car–what would have been a recruitment poster for all time if he'd been white. The image of armed Black folks has been the impetus for much of our significant gun control legislation, and not to put too fine a fucking POINT on it, but we don't actually have to "imagine" what would happen if a group of POC (particularly Black folks) were to form a highly armed compound with anti-government sentiments (even if they didn't break the law). You know....like the way white supremacists (who actually DO break the law) do on the regular.

We don't have to imagine what the government would do because we can just REMEMBER.

The second amendment's fucking history was explicitly for groups of locals to be able to put down slave revolts, and we still act like we're having a conversation where race is a side dish we can eat around. The argument that it is a "right" not only ignores a grand canyon of nuance, it isn't even true in praxis.

Bullshit rating: Just saying that's "bovine excrement" over and over again didn't help you when you stepped in it.