Bullshit Narrative 15- Gun Violence is Down. 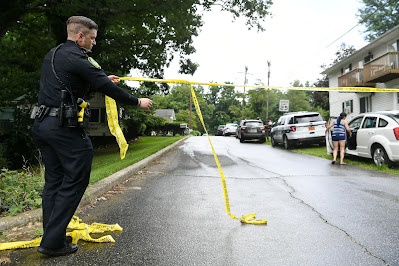 Yeah but school shootings are way, way up.

Look, I get the statistics and I get using statistics to support a point. And it is right that we don't just use the statistics that support our point and never look at the big picture. Half of the complaints against the NRA and its supporters are that they are using only statistics that support them and massaging the others, but anti-gun folks turn around and do the same thing. It's true and if we're going to have a conversation with any intellectual integrity and tear down these shitty narratives, we have to acknowledge it. It's almost as if somewhere behind all this NRA bullshit, there might actually be some good arguments and salient points.

But there are two things to keep in mind:

ALL violent crime is down.

And it's been going down for the last quarter century–most probably, according to sociologists, because of Roe v. Wade (which is not something most Republicans want to hear). So gun violence has gone along with that and that's a good thing, but it didn't happen because everyone suddenly got more responsible about their gun ownership in the nineties.

And it certainly didn't happen because there was a policy change.

There's a complicated intersection here between big and flashy events and statistics. Statistically a kid still might be quite safe, especially compared to say...car accidents. And the way statistics play against big flashy events is a point a lot of liberals have been making to every Islamophobic bigot who thinks Muslim=terrorist since 2001. A lot of this goes back to earlier points about what drives a young man to be violent in this way. And yes, there's absolutely a more complicated equation going on here than just "guns" or "not guns." But you can't just keep doing nothing about mass shootings and particularly school shootings while you intellectualize statistics. You just CAN'T do that.

This isn't a one-off event. We were up to once every month or two before the pandemic and we're ramping up.

It's not that these statistics are WRONG, it's just a bad argument. It doesn't prove anything and it certainly doesn't prove that we should do nothing.

Bullshit rating: Statistically speaking, that bullshit doesn't exist because the ratio of bullshit in the universe to not bullshit is infinitesimal. So you just stepped in nothing. Statistically.