Can You Get Up One More Time? (Success in the world of art.) [Personal Update] 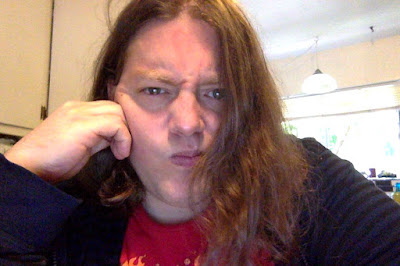 I'm having a terrible month.

I lost some income. I found out an opportunity that might enable me to phase out pet sitting is going to be years off rather than months. I spent the first part of the month trying to dig out of a mood crash. Personal things have been difficult. I've had trouble staying on schedule. The air/fuel mixture on my side gigs was set to "overwhelming" and it impacted everything. My ADD/ADHD has been a rampaging beast. I haven't been sleeping well, and for me that can mean a lot more than a little mid-afternoon fatigue.

Mostly, my terrible month involved terrible writing failures. Usually, I can feel pretty good about life, even if everything else is going down in flames around me, so long as I'm writing well. But this month my writing has been craptastic. A lot of the reasons are the same ones as above. I failed every goal I set up for blog post scheduling. I tallied up my word count on my manuscript and actually had an existential crisis. (Seriously, like two pages for the whole month.) I'm about to put off an article that should have been up a month ago for another week. My plans for craft essays got derailed by the news and social justice posts. Except for maybe a day or two after my gun article, my imposter syndrome ate me whole.

I'm not just telling you this to whine or make excuses. A poignant juxtaposition is coming. Or at least a clumsy one.

I have to tell a story though. It's truth but it isn't "real," like many stories that writers tell. It's the story of a composite writer made up of dozens, perhaps hundreds of friends, fellow students at SFSU, and other ambitious writers I've met along the way.

This composite writer, let's call him Jake, has a story of a great writing failure. A regimen committed to. A goal set. An ambition given form. "This year I'm totally doing Nano." A book that would be finished by 30. A manuscript submitted to an agent. It doesn't matter what Jake said he would do.

What matters is that he didn't. Jake failed. Jake fell face first into the proverbial mud. He quit Nano on the 10th. He floundered in the middle of his book. He was still managing Target at 33. The agent turned him down with some pointed feedback about learning to write before submitting again.

And then Jake walked away from writing. The dream lived on, maybe even the oft repeated assurance that he was getting back to it one of these days, but the writing laid fallow.

I've been Jake more than a few times in my life. I set the writing to the side and walked away––sometimes for months. Once, my second draft of a manuscript got completely roasted by a friend, and I barely wrote for a year. The difference between paid, professional writer Chris who is writing a book and pays his bills by blogging and Jake Chris who never made a dime and felt deeply unfulfilled is that the former stopped letting failure be the reason he didn't keep going.

While months quite as stacked with shit like May aren't super common, I fail at least half the time. Honestly, I'm not sure it isn't more. Anyone who has seen me announce what articles I am going to get written for the week knows that 50/50 is highballing it. I'm going to spend the six weeks of "pledge drive" while I'm teaching summer school trying to reach last year's financial goals. I'm still working to get fiction up more frequently and that's been a goal every year since 2013. My book is nowhere near where it needs to be to hit my twice extended deadline estimate.

Unless your goals are far too easy, failure is an inevitable part of life and an even more inevitabler part of an artistic career. Somewhere out there is a deadline, a review, a gatekeeper, something that is going to crash into you like a donkey punch. Especially if you're setting what seem like reasonable goals when you're happy and working well and rainbow unicorn farts that sound like eighties montage power chords are fueling you.

But who you are, what you care about, what you'll go the distance for...all of that shows up when you fail. The things you stay down for and give up on...maybe you didn't really want them that much. The things you get back up for, there's where life gets interesting.

I know I bang this drum a lot, but I get a lot of questions about HOW to make it. Like it's some trick or magic or slight of hand. Or if you just go get an MFA or an English degree from SFSU with emphasis in creative writing that after that everything will be easy and it'll just fall into place.

But the real trick in art and particularly creative type writing is to get back up at least ONE more time than you get knocked down.
at May 30, 2018