ACTUAL Protip: Don't Do This 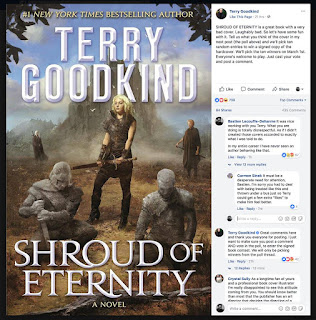 I don't normally mess with author gossip here on Writing About Writing. Our incestual little industry has enough tricky-to-navigate gullies and plateaus without accumulating the enemies one would by taking sides every time there was some infighting.

This one, however, caught my eye.

It caught my eye for two reasons. 1) It was a shocking display and 2) it went viral even among my NON-writing friends.

The writing world doesn't get lessons like this very often. It takes years of learning how to learn, watching and studying masters craft skillfully, and practicing their techniques with infinite forbearance (and no small measure of patience for attempts that do not measure up) to have even a sense of what TO do that goes beyond instinct and perseverance.

But it only takes one bumbling mistake to be a lesson for the ages in what NOT to do.
Here's a short rundown for the uninitiated: Terry Goodkind announces a contest on his Facebook over how bad his cover was. "Laughably bad," is his exact words.

And this was by way of a contest where the stingiest stinger about how shitty the art was would get a free book.

The artist who DID the cover art, Bastien Lecouffe-Deharme, basically said "Hi. Artist here. This isn't cool," in the comments and then made his own post pointing out that in decades he's never been treated that way as an artist. Terry has since kind of backpedaled, blamed the publisher for commissioning a work that didn't really reflect the emotional core of the book (or something), and that the quality of the art is good. He apologized to the artist, and did say that it wasn't their Lecouffe-Deharme's skillful art he was upset at, but rather the publisher that overruled his objections to the artwork. Still the damage to his professional reputation had been done and switching out who he threw under the bus for a target everyone loves to hate ("The Publisher") didn't work as seamlessly as Terry was probably hoping.

Make a mental note here folks. Lesson number one happens before the breakdown even starts: This is a VERY established author who has (apparently) ZERO control over the cover art on their book. That's the way traditional publishing works.

Personally, I don't read Terry Goodkind. I've got enough in my TBR list to last about 80 years and that's if no one writes another word starting now, so I am pretty okay with not reading overtly Randian/Objectivist themes that use rape every other chapter as a plot device in my fluffpuff fantasy.

To be sparkling, crystal lake clear, I'm absolutely okay reading what I call "popcorn books" (the saga/chronicle SF/Fantasy books of NOTORIOUSLY flat prose that started flooding the market in the early 90's when publishers realized they were cash cows [of which Goodkind is sort of infamously associated]–popcorn books are light, fluffy, and not very nutritious). I'm also totally okay–and even enjoy–reading authors I disagree with and who really force me to think about things, but when I reach for a book by choice, it is almost never the combination.

But this isn't about Goodkind's writing. I don't have an opinion on that. His professional behavior though is a cascade of lessons in what writers should never, EVER do. Particularly with regards to an aspect of their creation that involves the creative efforts of other people. It's sort of en-vogue for authors to low-key hate their publishers (a strange sort of antagonism if you think about it for just a moment), but the other artists involved in a project are another matter.

Goodkind isn't in any danger of losing his die hard fans–they have raced to his defense on every post (and will again if they find this one). But folks who just so-so liked Goodkind have a bad taste in their mouths. Those who were ambivalent are recoiling in disgust. And those who never knew him are vowing they won't pick up a book of his willingly. Ever. I'm guessing this little faux pas costs him, and for an author as commercially popular as he is, I'd bet it's low to middle five figures of pain.
LOW TO MIDDLE FIVE FIGURES.

Whether you agree or not (and clearly I have my opinion) that's probably not the result he was looking for doing a social media promotion.

If he simply didn't care, that would be one thing. We all have our lines in the sand and our principles. Sometimes I have to let the dudebros and Status Quo Defenders walk away offended from my own social media interactions knowing that they may never buy a book of mine again. And fuck if that isn't just a-okay with me.

But if it's not a matter of principle, that's a lot to pay for not just apologizing to a (very rightfully) insulted artist with some sincerity and grace. Or better yet making the OP clear that you're talking about the publisher-commissioned content (and not the quality of the art in the first place). Or even better STILL, contacting the artist before you run your art-bashing poll and taking their temperature on the language. ("I was thinking I might describe the cover as 'laughably bad.' Oh hey, yeah. Yeah okay I can totally see how that might..... Oh absolutely. So you'd prefer it if I used the term 'Great work but laughably out of touch with my vision'? Yeah okay. I can really feel how that changes the flavor. We cool?  Okay awesome. Nice chat.")

I mean how do you think the visual art world is going to feel about working on his projects now?


Here's the crank of it: I can totally see this happening. You get wrapped up in your own shit. You hate the cover. You kick and scream. The publisher vetoes you. That really sticks in your craw because you've published like a zillion books (and all but four of them in one never-ending series) and you'd like to have your artwork taken seriously. You kind of feel like that cover is a part of your book and so you can trash talk it all you want without any consequence. And you start talking about how the cover sucks in open company. And in your mind this is really only between you and your publisher.

We've all done something similar. We see things through OUR lens when we're upset, and we sometimes take petty steps on social media that maybe ignore the nuances of who else might see our wording in a different way or be hurt by it.

But fuck if the artist of that cover personally shows up and calls you out, you don't say "Pffft. Wasn't talking to that pissed off guy–so anyway about this contest," on another post speaking to your fans. (Not unless, of course, you want to be remembered for taking a shit on an artist for a very long time.) If, on the other hand, you care about trashing the professional reputation you've spent years building, you trip over yourself to make sure that, from one artist to another, you apologize profusely for the miscommunication and you walk it back for the world to see. You salvage that shred of professional integrity that will be left if–IF–you get forgiveness from the artist and make nice with everyone involved. You don't just shell game the blame and toss the apology into an almost throw away sentence inside of four paragraphs about how you didn't REALLY do anything wrong. Professional writers don't often choose their words poorly.

If he didn't mean to dis the artist, the language in the OP and the whole "contest" was unconscionably insensitive, and it was incredibly naive to think the artist wouldn't find out. If he did mean to dis the artist he probably forgot that shit can go viral in a New York minute. Either way, it's a pretty big lesson for all of us in the bleachers about what not to do.

Social media is a ridiculously unpredictable animal, and today's writers are pretty much condemned to have to navigate it. So without telling you WHAT to do (as that is your choice), please remember that if you step on another artist's toes the world may get the instant replay in screenshots and links and then be watching to see what you do next. Doubling down and nonpologies can actually do your writing career some very real damage.

But perhaps more importantly, even if the world weren't watching, if you botch your writing so badly that someone thinks you're cutting into their creative work of hundreds of hours (and that's not exactly what you were trying to do), perhaps it is better to be good and kind. And less Goodkind.
at February 25, 2018