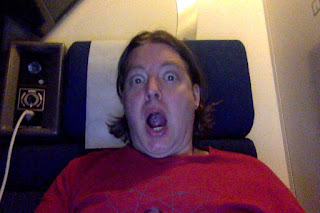 This post is two posts––well the first part of two days of posts, anyway so look for the exciting conclusion tomorrow.

Yesterday’s post (which you are reading even though it’s today and you have NOT ridden in any Delorians lately) got swallowed by the cascade effect that actually started over a week ago. (I will post a little something extra this weekend to make up for yesterday.) A lot of times, like Tuesday, I spend an eight hour day watching The Contrarian, and the only reason I am able to get a post up is that it was already written. And even though Labor Day created a three day weekend (the staff still refuses to come in on bank holidays even though I’ve doubled their salary from two to four cents per article on TOP of their daily stipend of fast food coupons—yet still they give me attitude), it was part of the week of dining on phail as the phail train crashed into the phail station and created the phail singularity.

The Week That Was

Last week was a recursion loop of phail. At each level the past phail magnified the intensity of the phail until everything collapsed into a phail singularity, and anyone who touched the event horizon of phail would simply have every plan for the next 168 hours instantly sucked out of them and replaced by emergency child care and screaming.

As much as it seems like I fly this blog by the seat of my pants, the first thing I really, honestly, genuinely (stop laughing, I’m totally not kidding) try to do when my life takes a turn for the more stable––as it finally did when summer school ended––is try to stabilize my schedule, get back into regular and predictable updates of non-jazz hands writing, and even write a little out ahead so that I can do things like have an emergency day without skipping a beat or get some Early Access articles written for my amazing patrons.

And things were looking good. Even though the weekend was going to have to involve some packing to get ready for a train trip, I had it wired.I was ready to chew gum and kick ass. Things were looking so good, they were extra good with good sauce. (Like a really nice parfait.)

Things looked good enough, in fact, that several gods of mischief blew kisses at me. They were worried I might get bored. These kisses combined into one epic, life-destabilizing mega-kiss. Sadly, at this point watching my best laid plans blow up is boring, so even that didn’t work out. What would truly be interesting would be if a week of writing went like I planned.

See, I was on track to have this very wide open five-day weekend with gobs of writing time to catch up and prepare myself for the upcoming writer retreat/vacation/train trip I had planned. I had settled into my latest pet-sitting gig, didn’t have any other jobs and was about to clock some epic word counts.

The Contrarian, though, had one more week of summer, and while it was established that Uberdude was going to take a couple of days off to run kiddo through some young super hero training, no one quite got around to making sure I was on for the later half of the week.

Fortunately that came up Monday. 16 hours melon-balled out of a week’s writing time is rough (I don’t know how many of you have chased a four-year-old for eight hours, but those days are not really opportunities to “double dip”). However, I could absorb it with notice. I was just going to have to really crank it out on Monday and Tuesday. But then that packing was still going to be there on the weekend, so I was going to have to crank that out too.   Still, doable. Just a little phail. Phail salad.  Then came the extra time. A second entire tier of phail. Super heroism in the age of Trump involves double most enhanced humans having to do overtime punching Nazis, so that meant I needed to do eleven hour days instead of eight. Coming home to collapse instead of knock out an hour of word smithing changes a landscape pretty quickly if you were hoping to get a little ahead. Would you care for a phail appetizer?

Then Friday there was a major upset and someone ended up hospitalized (who wasn’t me this time—but seriously why is my life playing like I’m a secondary character in a medical drama these days). The kid was going to need more supervision. Here’s your phail entree in a light phail sauce garnished with truffles and phail.  And this whole time, I was watching a doomsday clock on some freelance work I’d kept putting off counting down. (I mean I thought I had all day Thursday and Friday so…..) Oh….well I didn’t order the phail pairing, but let’s just go with it.

Still, what really sent the whole train wreck sliding off the rails as it barreled into the the station of Monday and Tuesday and became a phail buffet with parphail for dessert. A SCHEDULED eight hour day with The Contrarian on top of trying to wrap up a job and pack for a trip that would start crack early the next day (today). All without having had a moment to do anything but try desperately to catch up on sleep and zone out enough to achieve basic functionality.

And that’s when everything collapsed into the singularity of phail. With literally zero time to write a post, I simply had to spread my hands and laugh. I started out walking to an uplifting version of Raindrops Keep Falling on my Head, and ended up with in a Doom Metal montage about existential futility.

Of course....Where would such a post be without the PSA at the end where knowing is half the battle?

The idea of tempering life with writing and scheduling and how “fair” the mantra to write every day is has come up a lot lately in my orbit, and I’d just like to point out that I had a day where I didn’t “write every day.” It happens. It’s not the end of the world, and to the best of my knowledge that’s not why any of my patrons stopped supporting me. There was too much and I just couldn’t get to it.

However here’s the wisdom nuggetoid coming to smash into your atmosphere and cause an extinction level event in your ignorance: abandoning writing wasn’t the thing I did at the first sign of trouble. I kept revising my schedule and trying to get it back in there. I kept paring down how MUCH I could do and moving when all over the G-cal, but it was still there until there was absolutely no time left. I planned on getting to it until the last hour ticked over.

It was a priority.

And if people are looking for something that digs a little deeper than the bumper sticker wisdom of “Write Every Day,” one place to look would be how our lives become reflections of our priorities, not because we never phail them one shitty day of fail singularitizing, not even because we never have health problems or emergencies or sick relatives or bills that eat up our lives, but rather they tend to merit out one decision at a time over months as we place them front and center with each new plan (or don't).