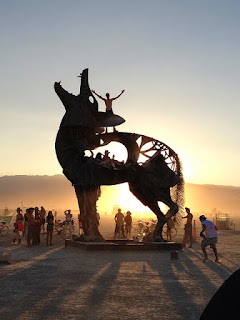 I can't even imagine what the context of this could possibly be. So I'll try a few things, and if you decide I haven't answered your question, write me back with just a LIIIIIIIITLE bit more context. Like…you know…an adult might.

Does that about cover it?

14- What’s your favorite art installation? What does it mean to you?

Though I haven't been since 2015, before that, I went to Burning Man 13 years in a row, so when you say "art installation" I picture these massive sculptures of metal or wood sitting out in the middle of The Blackrock Desert. Giant heads or massive human bodies or signs with letters twice as big as a person.

Perhaps my favorite showed up in 2010. (It was also located on Treasure Island in San Francisco from 2011-2015, and now lives in The Park in Las Vegas.) It's called Bliss Dance, and even though you can see the people in the picture who kind of give you an idea of the scale, it's even more impressive in person. The triangular wields and actual anatomical center of gravity give it this effortless sense of floating motion even though it is over three and a half tons (3,100 kg) of steel rods and stainless steel mesh.

In the Black Rock desert, you can see most things from a huge distance, so to just see this sculpture getting bigger and bigger as I approached and to see it somehow becoming simultaneously more lifelike and more obviously metalwork was breathtaking on a scope that is difficult to put into words. It's one of those few pieces of non-performance art that made my heart skip a few beats and I just stood and stared for nearly an hour. I know it's about the tension between objectification and empowerment, and I could see that theme before I even read about the artist's intention, but what I really like is that up close you can see that her eyes are closed like she's just vibing with the music, and it really feels like a moment captured—one of those simple human moments of expression.