Can You Smell What the Chris is Cooking? 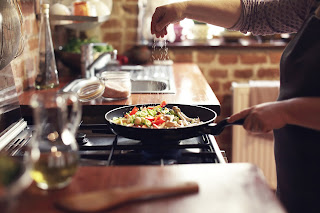 It's been a quiet week here, but I'm hoping by next week, you will understand why—or at least get the first hints of what is going on that I've been so busy with. Today was Treble and Clef's observance of Veteran's day, so I basically had about four and a half extra hours of childcare. And it looks like I've gotten nothing done this week.

I'm not going to lie—I'm still stumbling more than I'm cranking out the word counts. It's been a long and slow road to recovery. But the posts are coming and a major project is in the works.

Basically what happened is that my editor came to me with their part of something I had been hinting that I wanted to do for a couple of years now. They had done it. It was already completely finished. Suddenly, I was in a position to get a major non-blog project done.

But there was a catch…

It was about NaNoWriMo. Which meant I had to drop everything and put it all into getting this project done if it was going to be done in time to be topical. Otherwise it would have to wait for an entire year.

So that's what I did. I dropped everything and started working. I have a shit ton of editing and polishing and revision to do as fast as I can possibly do it, as well as two articles that are absolutely essential to round out the final version of this project. One of those will go live next week as part of the regular blog, and I HOPE this thing will get off the ground while NaNo is still a thing.