Lt. Lambaste and The SciGuy Fire Up The Pretentitron

Right. I'm Lieutenant Lambaste.  I had a cousin named Slaughter who worked with an anti-terrorism group before going into wrestling, but he was never an officer, and I will not live in his shadow.  Before we even get started, I'd like to make something perfectly clear.  If any compliment you feel like you want to give me includes the words "...for a woman," I'll remind you that I carry a sidearm. 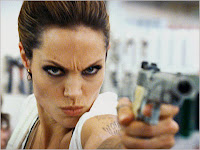 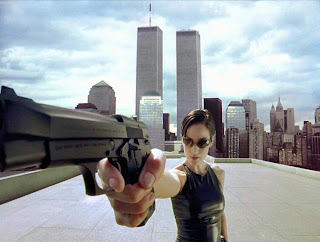 These people, and I, are badass.  Period.  Their bajingas do not factor into this equation.

I'll be guest blogging here on Writing About Writing the second Wednesday of every month where I will fire up The SciGuy's Pretentitron and provide some well needed balance to the convention defying that goes on around here at W.A.W. with my rocket launcher, flame thrower, machine gun, high pressure acid spray, biotoxin dart gun, buzzsaw hurler.

Six weapons....one trigger.  It's really quite spectacular.  Especially when it burns, cuts in half, poisons, melts, punctures and blows up some idiot who thinks they will become a great novelist by watching movies and reading comic books, or someone who thinks Virgina Woolf is "crap."

When I interviewed with Chris Brecheen, he said he really wasn't sure about a segment that seemed geared towards reinforcing some of the more parochial dogma about writing.  I pointed out that being successful in a world of gatekeepers involved learning whatever those gatekeepers thought was important, but he just started to go off on e-publishing and "other options" and something about how technology is changing everything in the modern world.  However, when I casually mentioned that "speaking of technological changes" I could easily use a laser pointer and my iPod Touch to coordinate an artillery strike on Writing About Writing's headquarters from an offshore carrier group, he immediately asked when I could start.

So join us here each second Wednesday as The SciGuy revs up the Pretenitron and imprints the wave patterns of pretentiousness onto the brain of a teenage wannabe writer clone so that we can have a little chat with them.

Email ThisBlogThis!Share to TwitterShare to FacebookShare to Pinterest
Labels: Ever Growing Lists, Guest Bloggers, Lt.Lambaste and The SciGuy, Menus