Product Review: Elements of Style by Strunk and White--Three Reasons To Own It 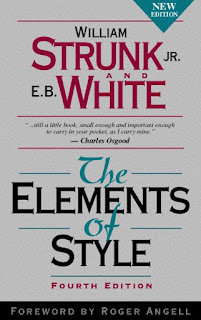 Strunk and White might be filled with anachronisms, prescriptive intolerance, and the general sort of peevish linguistic elitism that drives your sweet, lovable blogger right up the cliché, but every writer still ought to read it, and probably several times. It's not really a grammar rule book even though it gets cited as one pretty constantly. It's a style manual. If anything every "rule" it presents is a rule in contention that could go either way and the little book is saying how to do it in THEIR style. It's a lot like a publishing house will have its own personal list of rules (they're called "in house style guides") for all the places where there's ambiguity.

For some reason this one has caught on as THE style guide.

Strunk published Elements of Style as a guide for his students in 1918, so the fundamental core of the book is almost hundred years old and specifically for Cornell academic writing. Read anything from a hundred years ago and you will see in only a page or two that the language has changed. White made some changes when he got the book ready for widespread publication in 1959, but even the "spruced up" version has not fully contended with fifty four years of modernity. Since that point, like any wildly popular prescriptive tome (be it a style guide, an etiquette guide, or a religious text) its followers have been loathe to change anything that "the masters inked." As of the 2000 printing the book still calls on writers to pluralize person as persons rather than people, and the big move has been to get rid of the rule to always use the masculine pronoun unless the feminine is explicitly required. I guess it being the 21st century and all....

But here's the thing, and there's no getting around it: you need to read this book. Even if you end up choosing to ignore half the guidelines they offer, you should know they're there. And there are a few reasons why.

#1 You could do MUCH worse than to write like S&W suggest.

Seriously. There is no excuse for being so rage-against-the-machine pretentious that you don't think this can tell you how to write. Yes if you followed every rule, you'd sound an awful lot like you were writing in late 1950's academic style. But cruise around a few random blogs if you want to do a little experiment. There are worse styles you could have--a lot of them. Many writers would benefit tremendously from digesting a few of S&W's rules. You also need to know the rules before you can break them for effect or to be able to decide you don't want to follow them. I wrote about this on Monday. As Strunk and White say when tipping their hat to linguistic pioneers, if you are a pioneer, "then be one. But do not forget that what may seem like pioneering may be merely evasion or laziness--a disinclination to submit to discipline."

#2 This is the style manual that most people know.

Circular reasoning? Sure. But also true. As of this writing in early May of 2012, a human being living in America has begun to realize that a huge and growing percentage of other persons they might talk to have seen The Avengers. (See how weird that sounds?  Screw that rule!) So if you want to be up with the times and you happen to be going out to see a movie, you might pick The Avengers just so you can keep up with what everyone's talking about and the subject of no less than 32% of all Facebook posts right now. Now Strunk and White has fewer aliens than The Avengers, but the point is that you have to learn your grammar if you want to be a successful writer. You're going to have to pick up a style manual. It might as well be the one that three quarters of the writing world thinks of as their style bible. Yes, you can make a case for AMA, Chicago, MLA, or Oxford--and in fact these are more manuals than The Elements of Style--but still when most people are recommending a book on how to write, it's Strunk and White.

In fact, when I shared my story about the EIC who didn't think independent clauses separated by a coordinating conjunction needed a comma before the conjunction, the most common reaction was some variant of "that's right there on the first couple of pages of Strunk and White!" (Page five, in fact.) This book is well read and well respected. It's probably the one that makes the most sense to understand (even if you read it with a few dozen grains of salt standing by.) Because no one's going to fault you for using it (except my old EIC, I guess) and because many gatekeepers consider it the word of the Grammar God, it is good to know.

# 3 This is still a business with gatekeepers, and most of them are the grammar equivalent of swimfans for Strunk and White.

The last thing I want you to have as your take home message today is that all editors and agents are people who wanted to write but couldn't make it. That's mean. I also want you to understand there's a very real reason that this stereotype exists. I know several editors and several agents. I also know how many of them want (or wanted) to be writers.

So don't think that just because it's a vicious little stereotype that it is entirely untrue. Simply due to the way skill sets unfold in this business, the chances are that a grammar Nazi who sleeps with a copy of The Elements of Style under their pillow is probably the person who will be deciding if you are worth publishing, and they will not take a chance on your "awesome idea" if your style sucks or if you wrote the whole thing according to Chicago, and they THINK your style sucks.

Plus, I have to say, reading S&W suggest not using a word because it's "pompous" never fails to give me a giggle, so it's worth a laugh!

The Elements of Style is not without fault. It is not without contention, especially today. It is not without just plain prescriptive assholery that is fine for a professor at Cornell, 70 years ago, to demand of his students, but is pretty obnoxious for so many to insist is the "one true way" to write for all--even decades later. But, if you have to sit down and read eighty pages on how to write, these are probably some of the best eighty you could possibly ever pick. It would be very difficult for you to write in a way that can impress the right sorts of people without having read this book several times.

You are not too good to own this book. I promise. None of us are is. (Damn, I should probably look that up in Strunk and White.)