State of the Blog-  Well the biggest news coming down the pipe is that I'm going to start taking Sundays completely off.  I'm still trying to pare down the blog's time commitment against other kinds of writing and other obligations, and it's still hogging a bigger chunk of time than will work long term.  I think I'm going to wait a bit on the "productivity reports" because they were largely uninteresting to most of you (lowest page views of anything I did) and no one was joining in.  Perhaps if a lot  more people start reading, I will try again.  The prompts I will just incorporate into the many other things I am doing during the week. I know I wanted to put something up every day, but Sundays have a rather dismal showing, so given that I haven't had a day completely "off," by the normal sense of that word, since January, and the fact that I'm still trying to find the sweet spot between blogging here and everything else on my plate, I'm going to just take a break on Sundays.

Our page views are up, by about 25% from last month at this time, and I have seen 50+ page-view days that are more than just a fluke.  I want to keep thanking everyone who comments, shares, and either "like"'s or "+1"'s the entries.

On Thursday or Friday (I'm ashamed to admit I wasn't paying attention.)  We reached 3000 page views for all time.  I know it's chump change for most "real" blogs, but I feel like John Grisham.

Potpourri- In keeping with the linguistic theme I seem to have started this week, I'll continue on.


A pretty good break down of Prescriptivism, Descriptivism, and Assertionism.  Better than my description anyway.

A very interesting assertion that Descriptivism and Prescriptivism aren't really even part of a continuum.  Rat might appreciate the "truth value" argument here even though I haven't heard from him after his first reply to my post earlier this week. 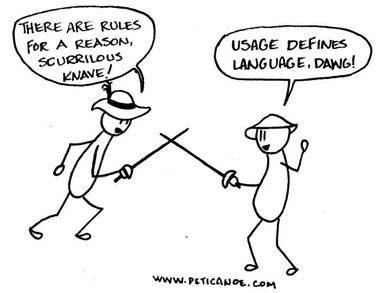 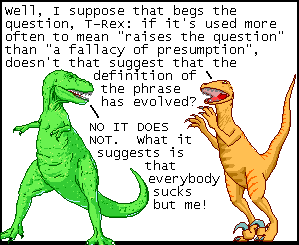 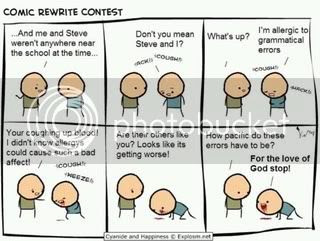 I have actually encountered the irony of someone using the informal meaning of "allergic" to describe their relationship to misused English, so I found this comic particularly delish. 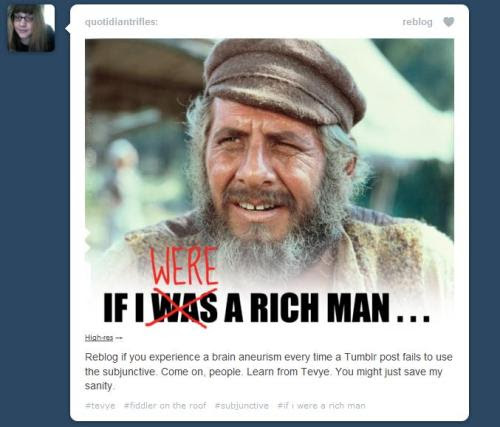 I got an e-mail from a friend suggesting I was overstating the hyperbole with which those with pet peeves described their irritations.  I dunno, do you think maybe "brain aneurysms" (so bad they apparently lead a hardcore prescriptive to spell aneurysm wrong) are hyperbole?

The head of linguistics at Edinburgh thinks Strunk and White need to be put out to pasture.  (Not sure I agree with that, but they certainly need to be considered with more grains of salt every year.)

Lastly I'll put up a couple of vlogs of a linguist who I really like.  She's awesome!!!  There's a whole series of them, all worth watching, but I'll only put up two (parts five and seven)  here, and you can poke around the "related links" if you want to see more. The first is about using "hopefully" at the beginning of a sentence, and the second is about clipping in slang...and how slang clippings from the past are today's legitimate words.