Writing About Writing Celebrates It's Best Month Yet With Office Shenanigans

There's more cool meta-news on the blog front that I wanted to share.  We're having a big party here at the central offices, but I figured I should take time out from doing lines of coke off hooker's asses to tell the world about our triumph!

May is the best month we've had so far.  It's only by THREE page views, but it still came in over March. 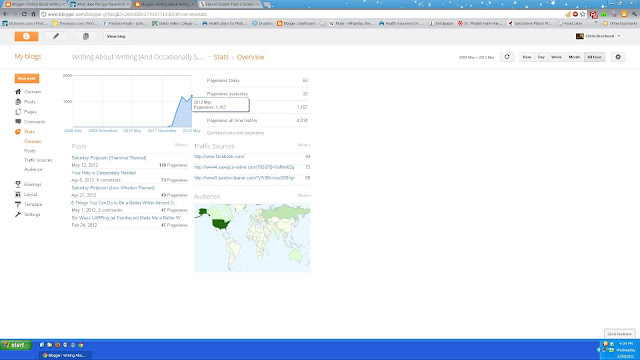 You can see we went a little down in April, and I think that happened because in March a lot more people were curious just to see what I was doing.  Writing About Writing isn't the sort of blog that would appeal to *anyone, and I think most people kind of took a look to see what I was so on about and haven't really been back. I had a huge number of hits early in the month that tapered off to a trickle by the tenth or so.  That early blast of interest inflated March's numbers.

Since then it's been a slow and steady crawl, but as you can see, we've had the best month yet.

Even the genocidal cephaloopod that Max (from accounting) and Trixie (the front desk of the admin offices) found when they went to make out in the supplies closet can't ruin the happy times.

By the way if you have any skills at accounting or administration please shoot us a resume.
at May 30, 2012