Who's a Good Widdle Pet Peeve? Yes You Are! Yes You ARE! 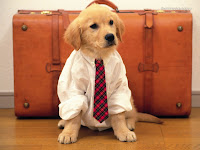 In what has begun to feel like a past life, I worked extensively in the food service industry. I even spent some time managing at a full service restaurant. And while I made about three times as much per hour waiting tables as I do now teaching people English, I wouldn't trade it for the world.  (Though I probably wouldn't say no to a restaurant that needed a couple of weekend server shifts covered either...)

Because of the sheer number of customers involved in food service, and the statistics of big numbers, eventually  a string of people will order the same thing. Six customers in a row will want coffee. You'll spend all day making Arnold Palmers (iced tea and lemonade). You'll get a day where 90% of your customers want one kind of dressing. It happens.

Believe me when I tell you that regardless of the restaurant, this freaks servers and cashiers right the hell out. They lose their shit in breathtaking ways. They'll start slamming down their trays in the service area and with red-faced rage scream "Goddamn it if one more person orders the salad with bleu cheese..." If (for some reason) it keeps happening, watch out. I've seen servers knock food over and break dishes throwing a tantrum over the fact that yet another table wanted two garlic butters instead of one garlic and one regular. I have seen McDonalds employees scream at customers because the twentieth person in a row ordered a Big Mac. I have seen someone walk off their job and quit because they were asked by one too many people to put the dressing on the side.

It doesn't make a lot of sense because if they weren't making their salad with bleu cheese, they would be just making a salad with something else. The ladles for the salad dressings are about ten centimeters apart, so you can't think that the experience of ladling out Thousand Island was significantly different. The garlic butter is five centimeters from the regular butter, but if anything, getting them both from the same place saves time. If they weren't ringing up a Big Mac, they'd be ringing up another sandwich. The ladle of dressing going into a ramekin instead of ON the salad involves perhaps two seconds more effort. Why do they freak out? It's not like their lives are really altered by one more raspberry iced tea. What's going on?

Because once something has clicked in your brain as "a thing," it's like seeing the smudge on the movie screen. You can't not notice it. The moment you think, "Gee that's happened a lot" it's like a little scorecard gets created in your head with ticky marks.

But how you handle it is up to you. And in the high pressure, high stress world of food service, many servers choose to vent their anger as soon as they're out of sight of the customer--who gets the big smile and the 24 karat service even if they answered the question, "What can I get you?" with, "How 'bout a million dollars!" like we've never ever heard that one before.

J-dog's monitor lizard was about 45cm (a foot and a half) but if you added in the tail it was pretty close to a meter (about a yard). This nasty little creature was the meanest fucking thing I've ever seen that wasn't a villain in a horror movie. It would bite so hard I would have a bruise for a month, and J-dog assured us that if it were any bigger, we could easily lose fingers to it. It would chase me down hissing the whole time.  It would do this tail whip that could leave welts through jeans. I remember several drives where J-dog would put that fucking lizard on the dashboard of his car, and I would be in the passenger seat and it would just glare at me. And if I moved, even if I just shifted in my seat a little, it would start to open its mouth like it was getting ready to fight, and would start to coil its tail back for a good whack. So I sat there, as still as I could, for the whole drive and this lizard and I would have a staring contest while I tried to comfort myself by remembering the end of all the Godzilla movies I could think of.

I hated that thing.

The only reason the group of J-dog's friends didn't kill his lizard outright was that J-dog loved her so much it was absurd.  He called her "Poopsie." He would walk around with this baleful force of pure evil sitting on his shoulder and would turn and say "I love you Poopsie!" in baby talk. He taught Poopsie to give him kisses. And he was the one person on earth that Poopsie wouldn't bite or tail whip when close. Poopsie went everywhere with J-dog, even to movies and restaurants, and J-dog would feed Poopsie whatever he was eating. It was like one of those weird socialite women with the tiny dogs stuffed into their purse, except that instead of being in a purse, it was on his shoulder. And instead of being a little dog it was a huge, evil lizard that wanted to destroy humanity.

What we did do, though, was stop inviting J-dog everywhere we went because we knew that would mean having to deal with Poopsie.

Now , Poopsie wouldn't attack J-dog outright, but he was constantly showing up with bruises on his face or bites or something and saying "Poopise got me." When we started to tell him to get rid of the lizard for his own sake, he started to lie about where the bruises came from. "I walked into a door," he would say or, "Oh I smacked myself with a cord." One time he obviously had a bite on his face, and (my hand to God) J-dog said, "It's okay...I deserved it."

Eventually feeding Poopsie mice that he had to "incapacitate" became too much, and J-dog sold her back to the reptile store he'd gotten her from. Keeping Poopsie strong and healthy was actually an act of conscious will.

When I see someone fire off a list of "pet peeves," they have about writing, (whether it is something totally understandable like the wrong "there/their/they're" or someone losing their shit over something tons of people do like using "P.I.N. number") I always go back to this moment when I was working at Magic Mountain. All of a sudden, I got this huge rush of people who ordered orange soda. We didn't have orange soda, so they invariably ended up with our lemon-lime drink. After half a dozen or so requests for orange, I started to get pissed off.  I happened to be standing next to another geek that day who was having WAY too much fun at my expense.  The angrier I got, the more he kept doing his Emperor impersonation.

"Damn it!" I shouted after about eight or nine.

"These people are driving me crazy!" I hissed.

"I can feel you anger," he said. "Give in to your hatred. Strike them down. They are defenseless."

Somewhere around fifteen or twenty, I knocked over a display stand with a screamed, "Fuck!" (I later told my supervisor I'd knocked the stand over accidentally, and the expletive was over the fact. If he'd been a little smarter, he might have realized I cried out a couple of seconds BEFORE I knocked over the display stand, but fortunately for me, food service promotions to middle management have much more to do with work ethic than Colombo-esque cognitive abilities.)

My friend loved it. As somewhere around two hundred sipper cups with Viper logos on them cascaded across the floor, taking half a dozen mini-pepperoni pizzas with them, he started clapping. "Your hate has made you powerful."

That's when I realized that there was no sense in allowing something to raise my blood pressure like that. Why would I give some other person that power? I never lost my cool over something like that in food service again. Of course I DID lose my cool the day when I was given eight tables of Christians who each ran me ragged and then tipped me with nothing other than their church's flier and a little tiny New Testament with Psalms and Proverbs in it...but that's another story.

They're called pet peeves. But I think we've lost the sense of how "pet" is the important part of that term. For a long time, when I thought of pet peeves, I thought of something you couldn't help but be irritated by.  It was just out of your hands and the other person was obviously being inconsiderate. Between your genes and your upbringing, certain things were just going to make you upset.

But then I realized that "pet" is the more important idea. We choose to feed them, and love them, and call them Poopsie, and take them with us everywhere we go, and even give them little validating kisses. And even if they're baleful little creatures that bring no joy or happiness to anyone (and may inadvertently hurt their owners or get their owners shunned because no one wants to be around them) we still choose to give them love and praise and treats and call them precious. That's what it means to have a pet, and that's what it means to feed and love and care for a pet peeve.

I may twitch when someone calls a baby a miracle because the agnostic, science-nerd in me is screaming that DNA self replication is just about as opposite of miracle as there is, but even that I don't let get under my skin the way I see some folks rage when they see "impact" used as a noun or "decimate" used to mean TOTALLY destroy.

I know people will always have pet peeves. That's just human nature. But owning the decision to nurture a pet peeve or ignore it is important too. We give a little dismissive shrug and say "Sorry. It's a pet peeve," like that makes any amount of intolerance okay, but what we should be saying is: "Yeah, I have made a conscious decision to let that bother me more than is reasonable or makes any sense."

Knowing that irregardless isn't a word...or rather that it used to not be a word and now it is increasingly coming into usage and may be a lost cause soon, and the next generation may think we're all fuddy duddys for not adopting it....er....um.... Anyway knowing that irregardless isn't a word is fine. Letting your self-righteous rage boil every time someone uses it...