Four Things Every Writer Should Know About Grammar 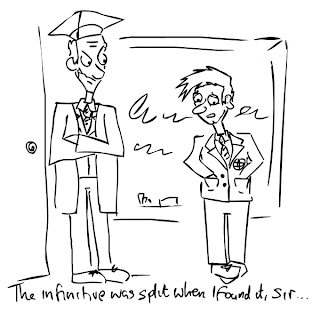 Now that I've spent a week banging away about how language evolves and many of grammar's more persnickety rules rank with proper use of a fish knife in terms of their utility in the real world and the anachronism that insisting on them creates, I should now take the time to give a nod to how important grammar actually is.

Let me make this absolutely clear...if you have any serious intention of being a writer, you better get your grammar under control.  You don't have to be a grammarian, and you don't have to be a linguist, and you really don't have to troll Facebook posts looking for the wrong homonym, but you do have to spend a few days reading some books that will help you straighten things out.

Personally I like Grammar Girl--she put out a book compilation of her blog bits--because she's willing to check various rules against multiple style manuals instead of just treating one as gospel.  She's not just a Strunk and White fangrrl and the others can jump off a lake.  Sometimes she tells the pedants where to stick it too.

1- It will not take you that long to learn enough grammar to get by, and you know much more than you think you do.

This is a few days of effort, tops.  You already know most grammar rules, you just don't know the names for them.  But if you're reading (and you must read if you want to write successfully), you are used to seeing functional grammar on the page, and you're going to get a lot of grammar right just based on what sounds/looks right.  It's just a matter of tackling the issues that aren't so intuitive like dangling modifiers, some of the more visual rules (like commas), and stuff.

Two days isn't enough to master grammar.  You'll still make mistakes, and you won't even pick everything up. There's a reason people work for years to have copy editor skill sets.  You just want to get it down well enough that you're not embarrassing the shit out of yourself.  (You know....like I do once or twice an article.)

Disdaining prescriptive grammar is no excuse.  Being cool about not correcting people just means you are not a douchecanoe and might die warm and accompanied.  But writers must rise to a higher standard. You're not a random person firing off an e-mail.  I've seen a lot of writers take descriptive linguistics as carte blanche to do anything they want or not learn the rules, and most of them have ended up making fools of themselves--usually when they encounter a gatekeeper of some kind who DOES understand the rules all too well, and equates good grammar with good writing.

And it ain't pretty.


2- To know whether a rule is vital or next level nit-picky bullshit and totally breakable, you must first understand it.


Look, if you think descriptivism is the easy way out, and gosh, how nice it is not having to pay attention to all those rules, lemmie just introduce your magical rainbow unicorn fart bubble to a spike shooter (80's video game style). If anything, descriptivists have the harder time because they have to learn all the places in language where the answer is "that depends."  And they have to know what they depend on.  They have to know when to trot out their "Sunday Best" for formal, academic grammar, and which rules are relaxed and at what levels of informality.

Strunk and White is not even a hundred page document.  Yes, it might be a pain in the ass to memorize a hundred pages of rules, but that is nothing--NOTHING--compared to how much information is involved in understanding how each of those rules interact, change, and evolve given context.  (It's no wonder people get degrees in this stuff.)

If you want the easy way out, become a pedant.  You never have to deal with nuance again.  Right and wrong and black and white are SO much easier than learning to code switch and contextualize and understand subtle shades of grey.  But if you're using descriptivism as justification for your ignorance, it will become very apparent VERY quickly when you break a rule that isn't okay.

Think the rule about splitting infinitives is so much elitist crap?  That's awesome.  But first you better  know what an infinitive is and what splitting it means and why it is sometimes considered problematic before you ignore the rule.  If you just go around splitting your infinitives because "fuck you; I'm a dragon," you're going to find that you have some sloppy and clunky writing turns of phrase, and you may not really know why.


3- To break a rule for effect, you must first understand it.


If you don't understand a rule when you break it, you're not breaking it for effect.  You're just breaking it.  That is a random occurrence that doesn't create any effect at all.

Let me give you an example: probably most people when they were growing up learned the structure of a paragraph and the structure of a sentence.  You learned about clauses, and you learned that most good paragraphs have between three and five sentences.  However, later on, in other kinds of writing, you probably have discovered that this convention can be broken.  In fact, in many kinds of writing--blogging included--it is perfectly acceptable to have a one word paragraph.

But the problem here is knowing how to make a one word paragraph work and why we USUALLY go with three to five sentences.  Anyone who's spent enough time online has probably encountered a blog or two where the writing is mostly short sentence and one word paragraphs.

Those blogs probably also felt a little scattered and unfocused.  If you've read them, you probably had a sense that the writer was just sort of using stream of consciousness.  This is because we use paragraphs to cluster and clump our information.  A bunch of tiny paragraphs give us the sense that ideas are not connected, and are just as discombobulated and difficult to read as one big, long paragraph.

Breaking the rule about short paragraphs is fine, especially in something informal like a blog.  But if without understanding what a paragraph is and why we use them, you lose the effect of impact a one word paragraph might have.  (Did I just use impact as a noun?  Yes.  Yes, I did.)


4-What you meant will not matter if you cannot write it clearly.

Writers have a higher standard.

You don't get to run around after your writing and clarify any questions people might have.  On a forum or social media maybe, but not a book or a short story or something.

You have one shot to get it right.

So if you want to break a rule for effect or ignore a rule that you hate, you better understand what you're doing and how people will read it.  If you don't, you're just going to produce troublesome writing.  No, you probably won't actually produce unintelligible crap, no matter what the pedants say, but it only takes one unclear sentence to ruin a story  Obviously, most people will be able to figure out what you meant, but if you don't want them to be pulled out of your carefully crafted moment to puzzle together what the hell you're saying and which suchandsuch modifier belongs to what, then you have to make sure it's clear the first time out.

You don't get to follow your writing around and defensively tell people that's not what you meant and blame them for reading it wrong.  Well, not unless you're really fucking arrogant.


I know I'm quick to jump on the anti-prescriptivism bandwagon, but it should be understood that what I object to is the one-true-way-ism of that approach.   I fear my position is sometimes confused as anti-grammar, and nothing could be further from the truth.  In fact, I like grammar in a twisted sort of eats-shoots-and-leaves kind of way.  My objection comes mostly when grammar becomes a truncheon for people to be assholes.
at May 07, 2012