A Writer's View of Inception (Spoilers) 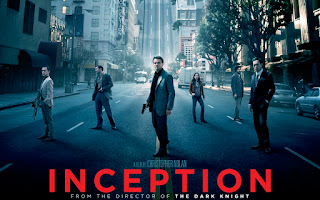 [As of this writing, still no word has been heard from Writing About Writing's head writer and executive producer, Chris Brecheen.  The SciGuy is using terribly scientific and absurdly sophisticated audio analysis equipment to review the log of Chris's interrupted segment on Thursday.  As of yet, we have only a single lead.  We know that Chris and the two federal agents were not alone in the studio at the time of the incident.  In the mean time, we know that Chris had more written about Kublacon, but no one knows the password on his laptop.  We have had to dig through some of the hard copy archives to find a Monday-worthy article.]

This article contains spoilers for Inception.

Wants vs. Needs:  Why Inception Makes its Own Big, Burning Question Utterly Moot*

Occasionally I am reminded that I simply look at art differently than a lot of people. Well, really almost all artists I've encountered share this perspective, so it's not exactly an elite cadre. I also don't think it's "better" than just enjoying entertainment for entertainment's sake.  (Though I might argue that it fosters a deeper appreciation of well woven elements.)  I just think that when we look at art, we tend to look watch for different kinds of things--especially deliberate decisions on the part of the artist and what they might mean.

As the blog reviews, friends lists of Livejournal, and conversations around me exploded with discussions of whether or not Cobb was dreaming at the end, I realized that it was unusual that I didn't particularly care to know or guess. I LOVED the ending. It was perfect with perfect sauce.

Most people wanted to decode the movie.  They wanted to figure out what "really" happened. Websites and conversations alike meticulously categorized the "proofs" of one hypothesis or another.

I think the people who noticed all the little details are truly amazing. They noticed thing in a single viewing that make me think maybe Dr. House is kind of oblivious.  I would NEVER have picked up some of that stuff if someone hadn't pointed it out even if I watched the movie two or three times through.   However, I did not discuss the clues to try and solve the mystery but to delight in the intricacy of the confusion.   In fact, I think if Inception clearly fell to one side or another on the question of whether it was all Cobb's dream, the work as a whole would have been diminished.

The entire audience groaned when the spinning top cut to black. They wanted to know so badly!

What was going through my head, though, was the dichotomy between a character's wants and needs.

Admittedly, a lot of characters that are more "simplistic" have wants and needs that are basically the same. Things get a bit more complicated and interesting when wants and needs aren't the same. Aladdin wants to marry Jasmine. Aladdin needs to find integrity. They're not lined up exactly, but the same five minute moment can resolve both.  When this really gets interesting is when you get wants and needs in direct opposition. Pixar probably provides the most well-known examples of characters where this is the case, and that is probably why their movies seem a cut above a lot of Disney stuff. Nemo's dad wants to save Nemo from all harm. Nemo's dad needs to cut the umbilical cord. A character cannot get both their want and need fulfilled and that creates the best character driven tension. They must sacrifice one in order to get the other. If this moment is sort of syrupy and sentimental, you get movies like Cars, where the character gives up winning for honor. If it is more gritty you often get moments like Fight Club where the character's needs overcome his wants...with a pistol. There are a lot of variations on a theme here--the better a story is, the less clear cut any "formula" tends to be. In Shindler's list Liam Neeson's character doesn't realize his need for humanity until it's too late and spends half the movie rationalizing it as his want--even though it isn't.

When I watched the last scene of Inception, I knew that there was an ambiguity about dream or reality. I was pretty sure they weren't going to SHOW us which it was. And I wasn't watching to "decode" the moment or find out what was "right." I was watching the character of Cobb, and thinking about his needs and wants. For what is basically a twist-filled action movie, Cobb is amazingly well characterized. (Proof that it doesn't take time--or pages--to characterize someone WELL.) His wants are very obvious from the first moment of the film--he wants to go home and be with his kids. His needs are a little more open to interpretation--happiness might arguably be a need, but I would say what he really needed was closure over the death of his wife. He sort of got SOME closure when he accepted her death, but it was very clear that he wasn't totally sure if maybe she was right and he was dreaming. He pegged his dream wife as not being nuanced enough, but that was actually not his true moment of wants vs. needs conflict.

This is why as the audience around me howled in frustration, I smiled and whispered "Perfect." The character of Cobb is a maelstrom of wants surrounding going home and the kids. His needs are buried so deep, they are literally in a basement of his mind.... metaphorically... literally... whatever. The end of the movie is perfect ambiguity because Cobb WALKS AWAY from his spinning totem. He doesn't even fucking care anymore. His need for true closure--"is this real or not?"--did not overcome his want. His wants won, and so true to the obsession of the character. That's such a rare end for a character arc that it was delightful to see. He walks away from his totem and doesn't stick around to serve his needs about all those nagging doubts. He has what he wants.

To me, THIS is the important part of the story. Whether it was real or a dream  makes no difference. What matters is that Cobb stopped caring. He makes a CHOICE. It is THE pivotal moment in his character and the movie. The online quest to discover the "truth" is interesting and fun, but not only does it not matter to the narrative arc, but if the audience knew the truth, it would have diminished any impact Cobb's choice created.


When I first wrote this for LJ, it sparked a handful of reactions both as replies and conversations in the following weeks still trying to establish the truth one way or another. I really think these efforts will be futile. Because the important part of the story is the moment where it stops mattering. In fact, Inception goes to incredible lengths to have just as many "proofs that it's real" with the "proofs that it's a dream". They've done a good job that even obsessed fans can't definitively settle the issue. They made sure the scales balanced perfectly. I think they probably went through with a fine toothed comb and made sure there was pretty much equal evidence either way. This was not a case of unclear storytelling. This is intentional and deliberate (and meticulously considered) ambiguity. While this has the effect of keeping internet bloggers arguing ad nauseum and provides some incredibly detail-oriented proof, I would be very surprised if one side could ever deliver the "clincher."  [Though I did see great article that Cobb's wedding ring is his real totem--if its absence wasn't just one of those mistakes they sometimes make.] You don't get that kind of balance "on accident." Inception doesn't want to be decoded. The "truth" is completely unimportant--not just unimportant, but antithetical--to that thematic moment and final act.

*And yes, I know what moot "really" means, and I'm using it in the sense of academically debatable, but not otherwise meaningful.
at June 04, 2012