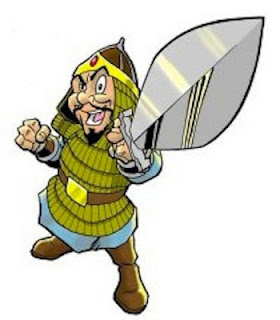 So most of the games I played in had a power differential between characters.  Even if the character sheets themselves were balanced (which is not even remotely the case in many games), certain characters are simply more powerful.  Perhaps they have more allies, more information, or have character goals that largely involve maintaining the status quo--which is always easier than rocking the boat.  I played a game on Sunday where every character wanted the dying man on the table to die--including the doctor watching over him--but it still took an act of subterfuge to do so.

In that same game I played a relatively minor character trying to secure my inheritance from my cousins.  I managed to accomplish all my character goals and even stuck it to the crazy widow (not literally) while doing so.  However, in doing so, I also allowed my grand-uncle to become an evil immortal, and my grand-aunt to bind a demon to her.  I had no idea about these "higher paygrade" plots until the wrap up of the game.  The only thing I even heard in character was about a "family curse."  So I spent most of the game doing my own thing outside of the main plot line.  Though I was doing my own thing VERY WELL, I was pretty much oblivious compared to the full story.  Killing Christian Vozza accomplished my goals...and ushered in horrific evil.  My bad.

Most games have a dynamic like this at some level.  Not every character understands every plot, and some characters just aren't that central to what could be called the main arc of the game.  They dig their claws into their own sub-plots and hang on, but at the end of the day, even if they tear off a huge chunk, it is not the whole game. I could only experience that plot from a minor character's perspective so I crashed into my minor plot with the force of a big rig....with a piercing ram.

I should take a minute to step down from the "...as a writer" podium for a second, and just make a caveat as someone who has played in LARPs for over a decade, and run and written several as well.  It's hard on a GM to write a balanced game.  They try, but any perfectly balanced game would come out feeling contrived.  For a game to feel real, there have to be social dynamics that aren't fair, wealth disparities that aren't fair, and even sometimes character sheets that just aren't fair.  We've all know the person that is just better than us.  Stronger, smarter, better looking, more erudite, more sophisticated, and more charismatic.  (Mine is named Dr. W.)  It's just not fair, but that's life.  In real life not every good looking person is dumb, and not everyone who is smart is hopelessly weak.  And those who struggle to maintain the status quo (in our culture's case white, heterosexual males) have an easier time of it than those rocking the boat to actually affect change. And so LARP's have to ride that sweet spot between realism and balance.

And so does fiction.

We haven't dug deep into the conventions of plot yet, but a plot must be a struggle between two relatively balanced forces.  This may not refer to the external plot, but it has to refer to something.  There has to be a lack of certainty within the reader as to what the outcome will be and a possibility for change.  A LARP where one side can't lose would be boring for all but the most masochistic and/or sadistic (depending on the faction they were on) and a story where the outcome is a foregone conclusion would be equally uninteresting.  One of the reasons The Last Starfighter sucked so epically bad was that the bad guys seemed pretty much put there only to get the absolute shit kicked out of them.  To this day, one of the most recognizable pop culture lines is "Bzzzzzzzzzzzzzzzzzzzzzztclick.  We die."  Cause that's pretty much all they did.

Yet in life, those things occur all the time.  There are people incapable of change.  There are forces so utterly unbalanced that the outcome of conflict between them is comically predictable.  There are people who are just better than you.  These things are depressingly realistic, but they don't make for interesting stories.  (Even in "high art" writing, when things are overly banal and gritty in their realism, there is usually a balance of internal forces that often doesn't exactly mirror reality.)  When we know how stories end, we read them because they tickle that part of us that yearns for something different to happen, but even the most predictable Greek tragedies have moments where it could have gone differently...where you yearn that just this ONE TIME the character will overcome the circumstance of their tragic heroism.

Fiction and LARPs have the same basic problem of creating a situation of balanced forces that is convoluted but appears to be realistic.  One of the most artistic things writers do is find ways to explore emotional themes of balance within while the physical realities are either more realistically imbalanced or are pedestrian to the point of banality.  Woolf's exploration of the balance between possessive love and liberating love in Mrs. Dalloway would be a classic example.  Externally all they did was wander around and have lunch and shit.  The balanced forces were within.

One of the ways to be true to this is to be true to characters.  When you see a story as a dichotomy between two forces everyone seems to fall on one side of a line or another and balancing those forces can get really ham-handed.  (This is one of the main reasons you tease theme out of what you've written in later drafts instead of bursting in, themes blazing.)  But in reality you don't have a single plot arc.  (You do, but that's not your only arc.)  You have multiple character arcs that are all about different forces and different goals and different outcomes.  Each character is not a tool in your plot, they are their own main character and even minor characters are working hard to kill their uncle and secure their inheritance.  Metaphorically speaking.

Each character struggles against their own demons and the dance between multiple characters doing so becomes the story.  You can have a minor character...a weaker character...whose internal struggles are much more balanced.  This is why you get a huge trend in speculative fiction of peripheral characters being the favorite.  They are the ones struggling against themselves--they are the interesting characters.  The main characters are often pushing up against the external plots.  They aren't conflicted except by what's outside of them.  And their story becomes much less interesting.  Notice how often the main character is not the beloved character in a story or series, and how often the beloved character is one of deep, defining conflict.

There's a reason for that.  Those are the characters the writer doesn't need to manhandle towards executing their preconceived plot, so they become the ones with the most latitude for a compelling story.

The best way to approach this is to remember that everyone is their own main character, and everyone has demons and struggles.  Your main character should be as frail as your minor ones, and your minor characters should chase their goals as passionately as your main one.  And not everyone is going to view the central conflict as a dichotomy upon which they must take sides.  They may not even care.  How many of our worlds "big bad problems" (tm) do you work as hard as possible NOT to think about while you deal with your own shit?  If you didn't answer some variant of "all of them" or "almost all of them," you are probably lying or in an asylum.  It shouldn't be different if your world's big bad problems are dragons or death cruisers.

A great working example of this is G.R.R. Martin's Song of Ice and Fire.  Don't ruin it for me.  I'm not even caught up with what's been written yet, but I immediately realized that it was a much different kind of fantasy story than those I was used to with their roving band of companions all basically on the same page (even when the wizard is totally evil).  Intricate weaving of motivations means that sometimes enemies are working towards a common end and sometimes allies are undermining each other--with or without knowing it.  There are very few "plot points" in those stories.  Most everything that happens is the progression of characters going after what they want, changing, adapting, and evolving.  Not all of them are balanced, and some are just better than others.  That's just the way life is.

But the struggles inside each one of them are balanced, and you don't know how it's going to go (especially since Martin has no deus ex machina-caliber love for his characters) with any of them.  In that way Martin creates a world of balanced imbalance and threads that needle of paradox that makes literature (and apparently LARPs) so wonderful.
at June 01, 2012