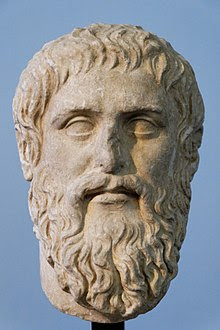 Good evening.  I'm Guy Goodman St.White, your quite British sounding host, and this evening I would like to take a moment to discuss a rather prolific author instead of a single work.  That author would be Plato.  Along with his mentor Socrates and his student Aristotle, Plato laid much of the Western tradition for philosophical and scientific thought.  He is perhaps most well known for the allegory of the cave and his theory of perfect forms.  We can probably also blame him for twenty-four hundred years of people who think "I believe X" somehow makes it true.

Whatever grudging nod we must give Plato for his work laying the bedrock of Western philosophy, it is eviscerated, however, if we observe him through a literary lens, for he insisted on being a prolific speculative fiction author.  Every time those Greeks turned around, Plato was scratching out some new manuscript that embraced a total lack of realism.   Honestly it give us pause to wonder if something wasn't very wrong with Plato that he couldn't keep his head out of the clouds of his own rampant imagination.  What he needed to do was stop visiting the world of make believe so often where he wrote down all that speculative stuff, and focus his attention and due diligence on creating philosophical thought.  Certainly it is not as if the two are related or anything.  He easily could have given us more philosophy if he'd stopped devoting significant measures of his time to such tomfoolery.

Instead we are subjected to his nonstop deluge of genre.  Plato delights in writing alternative histories where he portrays conversations with Socrates that never actually occurred.  Such debased lack of realism might be forgivable if he placed the historical character into gritty and banal situations of deep characterization with which to explore the human condition and the "greekness" of their love, but instead--in a profound example of everything that is wrong with alternative histories--he uses the interaction only to explore the philosophical and social issues of the time...and get preachy about them.

Were this the extent of Plato's dabbling into speculative fiction, we could almost forgive him his trespasses, but he insisted on also penning Utopian fiction.  Perhaps the best well known of these is The Republic, in which Plato goes on at length about his perfect wonderful island that doesn't exist.  And of course, a less well known work of Plato, Timaeus, is where we see the first sighting of one of, if not THE, most recognizable and oft-recurring single element in speculative fiction's absurdly unrealistic portrayal of Earth, Atlantis.  Oh yes.  You can blame Plato for every terrible Atlantis movie you've ever seen, for this ridiculous glob of drivel, from which thousands of horrible speculative fiction works have spawned, was his brain child.

I told you western philosophy wasn't worth it in the final analysis.

So thank you very much Plato for all your ideas about morality and politics, but we'd just as soon you didn't come back to the cave if all you were ever going to rattle our chains with was your new sci-fi paperback about magical-land.
Posted by Chris Brecheen at 12:31 PM