Six men came to write with me one time.  And the best of 'em carried this*. 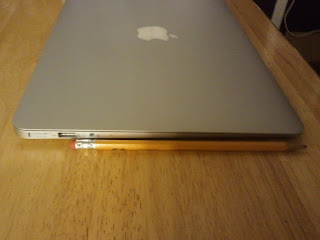 It's a MacAir full-bore auto-lock.  Double USB. Customizable Apps. 4GB Memory and 128 flash storage. A magnetic seal power cord. Weighs less than three pounds, and is renowned for how fast it comes on from sleep mode. It is my very favorite laptop. 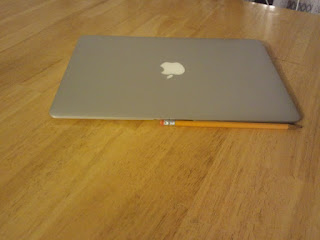 This is the best laptop made by man.  It has *extreme* sentimental value.  It's miles more worthy than what you got.

I call it Vera. 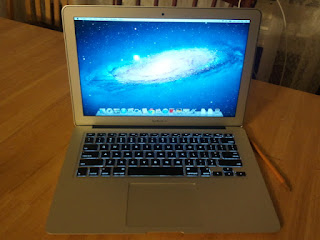 *Pencil shown so you can see how mind-bendingly sleek it really is.

The damage from the data corruption through MS programs is bad.  Most anything I didn't save some version of in the last year or so is corrupted beyond my ability to open it with any word processing program.  I can AT LEAST read it on my iPad with some viewer programs in between a bunch of goobldy gook characters.  I can't really edit, but reading it is something, at least, and much MUCH better than the error message I get from Microsoft based programs.  That's what made me kill all the sand people in the entire village and then go back for some youngling stew.

Eh, only one short story wouldn't have need a complete revision anyway, so this will just force me to do what I needed to as part of the process.

My main concern now is that this never happens again.  Or I really will cry.  Lots of writers swear by Macs and I can't help but notice that while Microsoft programs were making 15 years worth of writing (including every college paper and most of my pre-degree manuscripts that I wanted to come back to) completely unintelligible, it was Mac stuff that actually came through for me--even in what limited form it could.  It was the Mac stuff that did what it was supposed to.

That's what I need.  Shit that works when I turn it on.  If it doesn't work, I need a new one.  Instead of if it doesn't work...."have you tried Googling coaxial cable trinton frask and then rebooting from a save point six steps back while reinterpreting the main tachion burst into a harmonic resonance with the ion flow?"  Cause I'm pretty sure people asked me if I'd done that.

I don't really understand the product feud over computer brand loyalty.  You don't see people who like Cheerios claiming that the Corn Flakes guys are all part of a crazy cult or the Corn Flake guys rolling their eyes, putting on their matching robes and going to the local Corn Flakes store to commiserate on how off base the word "cult" is.  And you don't see the news wondering if every new turbo charged Nissan Skyline is going to be "A Mustang Killer."

I don't see why computers have to be this issue that requires people to jettison their brains before they discuss.  If you are a computer whisperer, and you can make those fucking boxes of circuits and shit do what you want them to do, get yourself a PC of the MS or Linux variety and spend countless hours fixing things every time your different softwares have tantrums about their codexes or whatever and don't get along with each other.  If you get hives at any step beyond the ON button, and generally LIKE when your computer pats you on the head and tells you what you want and what don't want, enjoy your Mac.

I clearly fall into the later category.  I need my shit to work every time I turn it on and if it doesn't I have to kidnap ship engineers and tell their bridge crew "We look for things.  Things to make us write."  And when someone fixes something on my box of circuits--usually Uberdude--I nod and say "He is smart."

So as I salvage what writing I can, and start the painful process of rewriting everything else, I do so on Vera.
at June 25, 2012