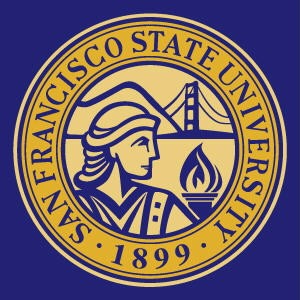 Lt Lambaste:  Lt. Lambaste here.  Welcome to the lab.  I've armed the Ubercannon, and the sci-guy has already fired up the Pretentitron, so you're joining us at the perfect time.  The clone has been cultivated, and is currently being uploaded with what the SciGuy has called "a composite of SFSU Creative Writing program graduates."


I can't wait to see what that even means.  SciGuy, you want to explain this while your clone uploads.

SciGuy: Well, as you know Writing About Writing's executive producer and head writer, Chris Brecheen, got his degree at SFSU, and when I mentioned the Pretentitron could take pretentious people's brain waves and imprint them on clones that we could then obliterate for their impudence he laughed and said we should cultivate personalities from SFSU.  Well the place was so rife with pretentiousness that I couldn't possibly settle on a single brain algorithm.  I decided to use a composite matrix of all the students graduating.

SG: As many as I could upload during the graduation ceremonies--which is pretty close to all of them.  As you know, Chris didn't attend his graduation ceremonies, so technically the results might be skewed towards better writing and a noticeably lacking signal to noise ratio.

LL: You know he signs your paychecks, right?

LL: You know he signs MY paychecks, right?

SG: What I meant to say is writing skewed more towards poor output and a signal to noise ratio that is...not commendable for practice.

LL: Perhaps it would be better if you awkwardly changed the subject.

SG: So...anyway my clones have a composite personality matrix of the entire graduating class of Creative Writing majors for the Spring 12 semester.

LL: So these are people who have finished a degree in Creative Writing.  Arguably the most serious and least pretentious creative writers in the world.

SG: Arguably.  I think you'll still be impressed with the final result.  Despite some diamonds in the rough, there were some remarkably disconcerting trends that caused the average to be...quite spectacular.

SG: We're getting the green light on the upload.  The clone is coming out of the chamber now.
Pretentious Clone: Holy fuck, that's a big gun.

LL: And not at all phallic, you'll notice.  So answer my questions or I'll shoot you with it.

PC: Okay....hey are we on television.

LL: Shut up kid.  I'm asking the questions.  You want to be a writer, right?

PC: Oh yeah.  I have this great idea for an epic space saga.  It's about this farm boy and a Dark Lord....

LL: Who are your greatest influences.

PC: Well, I don't really read that much, actually.  I guess Stephen King.  I used to read Piers Anthony.

PC: Well, I mean I read some stuff.  I read Harry Potter six and seven because I couldn't wait for the next movie. Plus I had to read boring shit to get my degree like Virginia Woolf and Seamus Heany.

LL: How can you write if you don't read.

PC: Oh well I just love making up stories.  I have this great idea for this epic chronicle.  I'm not sure if it would be eight books or more like ten, but I totally have this awesome end battle sequence worked out.

PC: Yeah, I don't know man.  Kevin Smith doesn't read that much.  He said in an interview once that he mostly just watches movies.

LL: Holy crap.  SciGuy was right.  I'm going to get pretentious bingo blackout in under five minutes with you.

LL: You can't honestly think you have the ability to write if you don't read.

PC:  My friends totally like the story I wrote for my short story class.  They all said it was really good and that I should get it published.  Well my girlfriend anyway.  My friends said it might need some polish or something, but I totally proofread it three times.

LL: I mean did you submit it for publication?

PC: The New Yorker and The Atlantic rejected it.  They don't appreciate my vision the way my friends do.  What the hell do they know.

LL: Maybe you should start with some place more suited to your writing style and skill level.

PC: Nah man, I just need to network.  It's not what you know.  It's WHO you know, right?  I mean they let that one guy write his own screenplay because his friend was a director, right?  So I've been going to all these parties, and trying to get in good with film students.  They need good writers.

LL: Why don't you go into movie making.  That clearly seems to be more your passion.

PC: Yeah, well breaking into Hollywood is hard.  Being a writer is a lot easier.  Plus Hollywood has all those wannabies who are like totally not serious but just have big dreams, and I totally--

LL: It was too much.  It was TOO good.  I couldn't even listen to him anymore.  We're going to have to do less well in the future if we want to have longer interviews.  You can no longer use the composite matrix of SFSU Creative Writing graduates.  They are simply way too pretentious.

SG: You got it, Lieutenant.  I will find something a little less pretentious for next month.

LL:  Well....dear reader.  We hope you have enjoyed our segment.  This is Lt. Lambaste here with The SciGuy signing off and wishing you a great June.  We'll see you back here in July for another round with the pretentitron...and this time I'll try to take a little longer to completely lose my shit and kill the bastage.  Thanks for tuning in...right here at Writing About Writing!