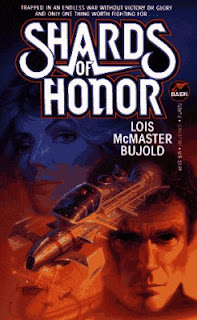 Note:  The poll itself is on the left hand menu, just above the biography. Depending on whether or not you have ads blocked, it is probably just to the left of the comment box at the bottom of this entry.  Everyone gets three (3) votes.

Vorksoigan takes an early lead in our poll.  Shocking considering how it barely squeaked through the semi-finals to get into the final round (and had a lackluster performance in the quarterfinals too.)  Nonetheless, in the finals round, there has been no shortage of fans stepping up to say that this series is the best.  Which is fine with me since I totally never have enough books on my "Must Read" list.  I'm not sure how I managed to get by this long without even hearing of a series that is so clearly awesome, but I've always had a blind spot with contemporary science fiction and fantasy since a lot of it is kind of rough.

Harry Potter and Chanur are tied for second place.  Though this may have to do with one of my Facebook friends and regular readers doing his best to "stuff the ballot box," I still have to give mad props to any series that most people wouldn't recognize outside of speculative fiction fandom holding its own against Hogwarts.

Here's one that surprised me: Lord of the Rings is in 3rd place.  I thought for sure Peter Jackson's opus would be catapulting Gandalf and his little friends into first place, but it seems that more people who have voted so far recognize LotR's monumental influence than actually think it is the best series.

Dresden and Foundation are tied for fourth.  Both are great for very different reasons, but any contemporary series that can hold its own against something considered canonical must be given mad props.

Dune, Pern, and Jhereg are all tied for fifth place.  I was a little surprised to see Dune doing so poorly--especially given its outstanding performance in the semi-finals.

Another shocker--Song of Ice and Fire is in LAST place.  This one made my jaw hit the floor, especially given how spectacularly Martin has done in the quarter and semi finals.  I thought for sure that Song of Ice and Fire would be in second place and the only question would be how much Lord of the Rings beat it by.

So lots of surprises so far.  It'll be interesting to see how the rest of the poll shakes out.

We'll get a much more interesting poll if you share it far and wide, and of course the larger the sample size is, the more we can take the results seriously.  Plus, unless you're a Chanur fanboi like my friend, you might want to work against his clearly biased interests by whipping up the other fandoms.
at March 10, 2013