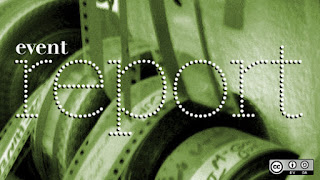 So Ima Lister is going to do is segment on Monday.  It's called "X Differences Between Writers and Dreamers" (he doesn't know how long the list will be yet).  Today we have monthly reports and forecasts and poll results and I don't want a third post clogging up the feeds of everyone like extra cured spam, even if it's a main article.

This "Monday" article may go up on Tuesday...or possibly even Wednesday.  It depends on how awesome the new Cars thing is at California Adventure, I think.  Ima is going to write it over the weekend but Unsupportive Girlfriend is taking me to Disneyland for her birthday, and it is entirely possible that she may say "We could go back to the hotel and you could write, or we could go on Star Tours ONE MORE TIME and see if we get that last end segment that we haven't seen yet.  And my nerd eyes will gleam, and I will remember why I love her.  And we will get in line.

Then, after three days, I will realize I haven't even phoned it in with W.A.W. and I. Lister's article is sitting on my desk waiting to be published, and I suck for being on the Dumbo ride when a thirty second phone call to Cedric would have fixed things.  But yeah, if you don't see me for a few days, it's because I'm spending three times as much to eat food next to a giant anthropomorphized mouse in a monarchy that is sufficiently advanced with its technology as to appear magic to the layman.

Feb Report:  February was not as spectacular as January or December in terms of numbers.  In the end I made a total pageviews much closer to last November.
I'm actually okay with this though.  You might think I would be tying a noose to the chandelier and telling my orange tabby Princess not to worry but that "mommy will take good care of you.  I'm going to a place where the pageviews always go up.  (dramatic pause) They always go up..."

But actually that number is really not too bad.  February is a shorter month by 10%, I took a long weekend during the convention, and I've been much better this month about at least taking one day off from W.A.W.


However, the main reason that number took a dive like the Cliffhanger dude when someone bid a Palladium retail price on JBL speakers is that I've been a much less aggressive about self-promotion, especially on Stumbleupon.  So that number tends to be a little more...."real."  The Adsense statistics are almost as good as January, proving that the main thing Stumbleupon makes money for is, well, Stumbleupon.  (Mind you "good" for both months means about $20, but February was not 20% less.)  It's a great social media for getting out there to people who who've never heard of you, but with limited returns beyond that.

So that's why I'm insisting through this haze of tears that everything is fine and it's really okay that I made fewer pageviews.

But on the opposite end of the TOTES AWESOME YO scale, Writing About Writing hit 100,000 page views this month.

Expect a new piece of fiction early in the month.  (It was going to be Feb, but I got pretty busy.)  I'm also playing Skyrim as time permits so I'm hoping to get to part III of that review.  I want to put another craft element essay up so I can pair it with some different writing prompts.  A couple more parts of It's Really Okay Not to Write.  Really.  And I plan on hitting at least a couple more letters on the glossary. I'm planning on doing the W.A.W. Staff portion of the tabs up top, as it is currently under construction.

Plus, there are new guest bloggers to introduce.  Leela Bruce found us a trio of sisters named Pointer who like to find things on the web that don't necessarily relate to writing, and bridge their wisdom with writing wisdom.  They will kick off their new segment next Friday.

All that, plus our usual shenanigans coming up for March, so lots to look forward to.
at March 01, 2013