I can't say I agree with the sentiment of this song.  Well, not the surface sentiment anyway--though the underlying one is pretty spot-on.  However, the inner word nerd in me simply loves that there actually is a song about punctuation.  (A song not sung by a Muppet or with a chorus of prepubescent kids, that is.) Besides Vampire Weekend is pretty damned cool, and who can't dig the fact that (apparently) Wes Anderson is making videos these days.  I mean...that just rules.

Also, I'm off to see a mouse about a thing, so I'll share with you one of the Disney songs I often play to inspire myself.  I know it's technically about doing enough push ups to be allowed in Mount Olympus, but if you kind of pick and choose your lyrics like a salad bar, it becomes totes motivational yo.  I'm less interested  in the cheering crowds or places where I belong and a lot more interested in going the distance.

Also, fuck the Michael Bolton version.  I think if I put Bolton in a post with Vampire Weekend, my entire blog would just explode.


Don't burn down the internet kids.  See you next week! 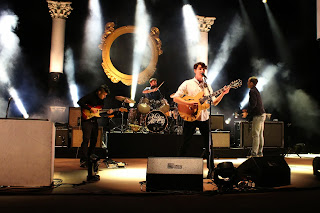