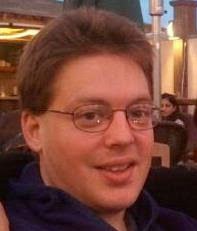 There's this weird guy who runs around when I'm not blogging here at Writing About Writing who looks exactly like me, uses my name, and even reads and writes all the time. Trust me though that he's a totally different guy.  He talks a less about threesomes and a little more about zombies. There might some overlap with real me like the writing and the quirky sense of humor, but this asshole is not the real me.

You want to know what's even worse? His ass-pucker face has the fucking gall to call ME a persona. ME!!! Persona this, you n00b! So don't be fooled by this shitty wannabe doppelganger. If you should happen meet this guy at some convention or at a party don't be fooled into thinking he's as awesome as me. He should be so lucky!

Currently sharing living space with a lovely peep and her teenage daughter.

They aren't actually one costar, but they're out there. And they sure do have a problem with some of my advice.

O.G.- I'm not sure what the "G" stands for, but the O stands for "Original." I know this because after I asked if "O.G." meant "opera ghost," she laughed and told me the O was for "original." ("Original gangsta?" I asked.  "Do I look like a gangster?" she replied. She left it at that. So cryptic!) What I can tell you is that she sure does seem to like me and my writing for some reason. A lot. She came to Oakland from her monastery (The Order of the Cyan Locks) in the high desert of The Rocky Mountains where they pride themselves on ancient recipes for green chili and omelets (and green chili ON omelets, I think) and where they do yoga for hours a day under the arid blue skies and mornings are so crystal clear they could slice your eyeball. She made a holy pilgrimage to Oakland to help me with my writing and noted everything from my productivity cycles to my facial expressions while I type to my posture. She's also had some incredibly motivational techniques that make me very happy to be a writer.

Always fighting the good fight, on an ambitious scale and with momma bear fierceness. She and I try to go on patrol once a week or so even though I'm not an official sidekick anymore. I like to keep my edge and the company is nice. Cap won't let go of America's potential to be better, but also won't ever shut up about how it's failing in so many ways.
at November 04, 2014