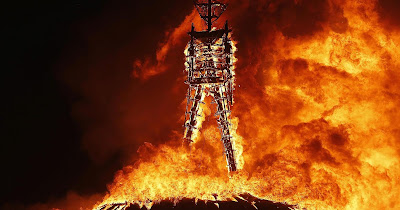 We came back early from the playa this year. Fully six hours before the man burned, we were driving off of the playa onto hard pavement headed home.

Though many of this year's reason for early returns are not my stories to tell the short version is that The Brain missed her kiddo too much to stay away another couple nights.

I didn't want to leave, but I didn't mind leaving either. I've been there and burned that (like fourteen times), and I'm almost just as happy to get out of the place before the trip home takes 12-16 hours instead of seven because of the length of time it takes for 70,000 people to leave an event on a one lane road.

Still The Brain saw some things out there this year that I've written about before. At the risk of both the snide, "I told you so!" and the defensive, "You've lost the faith!" (neither of which usefully frames the complexity, nuance, and conflict of my feelings) Burning Man is no longer a place I associate with chiefly positive emotions.

The chic camps. The art installations and art cars that look more like they involve lots of money than lots of creativity. The very real stratification and "hidden" commodification. The creeper guys. The Brain called the camp across from us that foamed everyone down and then hosed them off, "very touristy," and I sort of had to agree.

The drum circles are all but gone. The sense of family with the local camps...virtually nonexistent. The radical politics at every turn....mostly a memory of yesteryear. Sexuality and drugs in the open...cracked down on over a decade ago. And everyone is stamping around feeling entitled to entertainment and/or adulation.

Perhaps the worst thing–and I'm taking the word of the women I talked to since as a dude I can't sense these things myself–was that Burning Man feels unsafe. Sexual assault has never been absent at Burning Man, but the statistics are getting alarming. A lot of women don't really feel comfortable walking down the street at night anymore or being alone with someone they don't know pretty well.

The Brain encountered a creepy guy giving kisses without consent to conventionally attractive women at the porta potties and was nervous to return. (He was gone when I went to have a [hopefully] friendly chat with him about silence not being consent.) A friend returned from an event table-flippingly enraged about how there had been a conversation among the buzzed and drunk men there blaming women for getting themselves into situations and giving false signals, and talking about how "most sexual assault is a misunderstanding that gets blown out of proportion." We were across from a camp where they were letting people jump the queue with "performative art."  Much of that meant telling jokes. So, so, so many were rape jokes or racist. I watched The Brain's face as she listened to a joke about Mexicans. It was like something inside her couldn't believe it was happening there of all places. A little bit of light died in her eyes right then. And I almost went across to pick a fight when I heard a gang rape joke that was so horrible, I can't repeat it (and the person who told it given a slight groan instead of scathing repudiation). This year I heard one woman say "watch my drink" to her companion when she went to dance.

Don't get me wrong, I'm not shaming the people who get their mac on. I wouldn't mind playing "Lick the Not-Dusty Spot" with many of the people out there–hardbodies that inspire the kind of thirst that even your camel pack and a Capri Sun are never going to quench are abundant. But informed, enthusiastic consent is absolutely vital and not kneeing someone substantially stronger than you in the nuts because they're kissing you without asking shouldn't be taken as a yes.

I've been watching this evolution from something culturally subversive to "massive desert party" for years and have been ambivalent about going for.....six or seven years. The huge influx of newcomers each year means that an established culture isn't "passed on" before it can be overwritten–this was compounded when they started selling out and had to go to a lottery system. And of course the shifting demographics of wealth and low  are impossible to ignore. The Brain really noticed a lot of it this year. We might skip a year or three before we next make it out.

However....it would be too simplistic to just complain about rich libertarians "moop"ing up the place, and how back in the good ol' days it was better, and "get these virgin whipersnappers off my lawn!" and then drop the mic. There is a bit of grieving going on that this might be our last year for at least a while.

I'm okay with this.

I'm not okay with this.

It's like loving someone deeply, but staying with them isn't healthy because the good moments are drifting further and further apart. (And why is my brain coming up with a contender for worst metaphor contests: "like the way microwavable popcorn pops only every few seconds once it's burning.") As long as I was being dragged along for The Brain's sake, I never really had to confront the enormity and complexity of my feelings that it was time to walk away, or at least take a break. I could go and shrug and say I liked it enough when I was there, which was all true. I packed up and shlepped up there for her, and then had a good time.

However, a part of it why I go can't just be dismissed as "for her." It will always be for me. I will always be standing near the perimeter (at some bit of art that wasn't snazzy or big and got relegated to the outer ring, but was GOOD and considered and meant something and fucking MATTERED and changed me in my soul and shit) and remembering who I really was in that deep relief, almost-quiet of a distant EDM beat and the sound of endless wind over timeless flats.


One really, really cool thing did happen this year:

I was way out in deep playa, just a few minutes before a white out would reduce visibility and make me have to stand there for over an hour, just waiting to be able to see enough landmarks to know where "back" was.

A woman came over, looked at me like she recognized me from long ago (that sort of lower head look upish look.) "Are you....Chris Bree- chun," she asked. (Everyone gets my name wrong. I don't even bother to correct most people. It's actually pronounced bruh [rhumes with "duh'] KEEN [rhymes with "scene")

I thought maybe it was an old friend that I wasn't recognizing. (People usually look a little different out there than they usually do.) She was maybe in her mid fifties and decked out in a slinky dress made of shimmery, almost reflective scales.

"Yeah," I said, still trying to place where I knew her from.

"I love your blog!" she said. "I can't believe I recognized you, but the folder and the shirt tipped me off."

I guess my description of myself in my Burning Man article (overweight and short, Hawaiian shirts, always carrying a black notebook I write in, socks and shoes because of dry skin–all a little unusual out there) along with pics of my face was enough for someone to recognize me.

We had a huge hug, and she gushed a little, but unfortunately she was letting her group going the other way get way out ahead of her, so we had to keep it brief.