World Building: It's Not Just for Genre Authors (By Anthony Woo) 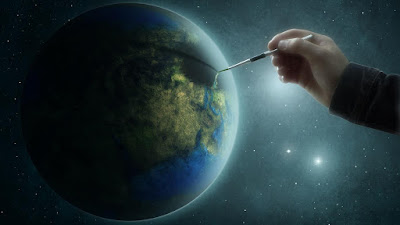 When you think of world building you probably think of speculative fiction settings. You might think of Tolkien’s Middle Earth, with its thousands of pages of fictional history, more than a dozen languages, language groups, and scripts, and created the basis for the medieval fantasy stereotype. You might think of Rowling’s Hogwarts School of Witchcraft and Wizardry, with its intricate and internally consistent magic system, atmospheric locations, and bizarre interpretations of modern technology. You might think of Star Trek (yes, I know, not technically writing, but still an excellent example of memorable world building), with dozens of books devoted to technical schematics, people who are fluent in Klingon, and more allegorical aliens than you can shake a stick at.

If that seems like a lot of effort for what we all learned in Elementary as “just” time and place, it is. But all the work to establish location and era is necessary. No reader can experience the contrast between the bleak subsistence living of District 12 and the conspicuous consumption of the Capitol. Not one of us has stepped into a wardrobe full of fur coats and come out the other side to find a magical world of talking animals ruled by a snow queen that hates Christmas. These places exist solely as words on the page and our imaginations. And, of course, this is the advantage speculative fiction has over other forms of fiction.

In speculative fiction, the setting is frequently as much of a character as any of the people with names. And like any character, the setting needs an appropriate introduction and details that differentiate it from others. Redwall, for example, would be far less memorable without the attention to culinary detail and the Enchanted Forest would not be nearly as entertaining without the frequent self aware nods to stereotypical genre tropes. But if you’re not writing in Lyra or Tortall or Dragaera, you don’t have to do that. You’re writing about a real place. A place that people know. A place that people can see and hear and smell and touch. Right?

A few years ago, I skimmed an article about the history of Chinatown. It was described as an attraction planned and developed by the Chinese community. A location that would draw tourists and benefit Chinese immigrants with employment without the fear of racial discrimination. I had to read it again, because that was not the Chinatown I grew up in. The Chinatown I knew was an ethnic ghetto created by redlining. It was populated by mostly low income and ageing immigrants who had little opportunity to learn English. In my memory, it had gone through a period of gentrification that had (mostly) failed to displace the existing community. It turns out I was reading about the wrong Chinatown.

The Chinatown most people have heard of, the first one, is in San Francisco. The other one, where my parents grew up and I visit on a regular basis, is in Oakland (and if you've never heard of that one, you can probably tell from my description why). The point being that, even with real places--perhaps especially with real places--world building is critical. Without a description, just the name Chinatown, I would never have known the difference.

So does that mean that you have to write about every stone, tree, and blade of grass? Not necessarily. On one end of the spectrum is Tolkien. Consider the tower of Orthanc which is a relatively minor location, with pages of text devoted to its description, history of construction, battles fought around it, and various occupants and owners. On the other end of the spectrum is Jane Austen. We know hardly anything about the town of Meryton--best known as the setting of Pride and Prejudice. It is a provincial country town in Hertfordshire near London, and that's pretty much the extent of our knowledge.