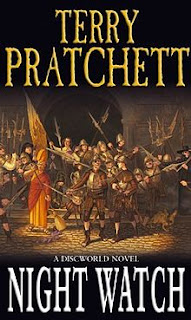 I'm flipping the order of operations between tomorrow and today–today will be the poll and tomorrow will be Evil Chris's survival guide to week three of NaNoWriMo. The reason for this change is three and loves Death Star jelly bean dispensers. Also I'm going to weep bitter tears when N.K. Jemisin doesn't make it to the finals (as it seems they won't), so if you see me on the streets, have pity. I am going through the only slightly imaginable. However, such is not under my control. *sigh*

There are only four days left to vote. On Saturday I will post the results of this poll and put up the final round.

I know some people won't read this before they look at the choices and make a comment on Facebook, but please consider that 1) this is only half the titles in the semifinal round ("Oh my god how could Harry Potter not make it????" It did. It was in the first semifinal and will be going on to the finals.), 2) there were rules that disqualified titles that came out before 1992 ("Why isn't Wheel of Time on here?" Because it's not modern according to the definition of this poll.), and 3) there have been twelve rounds getting to here and that was after the epic-est nominations process I've ever seen, and much like N.K. Jemisin's unlikelihood of making it to the finals, I controlled literally NONE OF IT. My readers made all the decisions, so if a title got voted off the island or never got nominated, acting like it is a crime to the genre might make you look a little foolish.

I'm told if you're on mobile you have to click "webpage view" then scroll alllllllllll the way to the bottom, you can find the poll.
at November 21, 2017