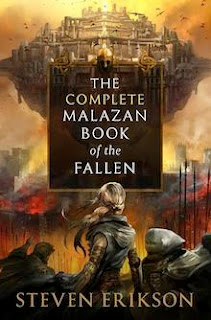 When The Dresden Files, Pratchett, and Gaiman get voted off the island, I'm going to laugh and fuel my Genesis Device with all the "How can any serious poll not have my BABY?" comments that drop about the final round, so if you don't want me living forever off of your delicious tears, you better vote.

There are three days left to vote. On Sunday I will post the results of this poll and put up the second semifinal.

And while I know the laws of large numbers have begun to determine that a certain number of people won't read anything but the preview text and the poll before commenting that oh how could their very favorite fave not be here, please consider that 1) this is only half the titles in the semifinal round ("Oh my god how could American Gods not make it????" It did. It'll be in the second semifinal.), 2) there were rules that disqualified titles that came out before 1992 ("Why isn't Wheel of Time on here?" Because it's not modern according to the definition of this poll.), and  3) there have been twelve rounds getting to here and that was after the epic-est nominations process I've ever seen and I controlled literally NONE OF IT but rather my readers made all the decisions, so if a title got voted off the island or never got nominated, acting like it is a crime to the genre might make you look a little foolish.

I'm told if you're on mobile you have to click "webpage view" then scroll alllllllllll the way to the bottom, you can find the poll.
at November 09, 2017