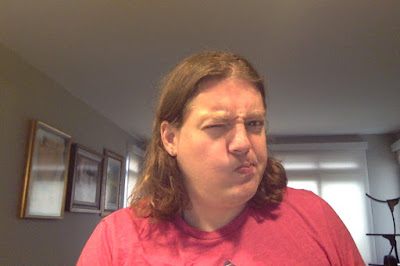 It's not quite hate mail, but I'm not exactly putting up with this shit either.

[Remember, keep sending in your questions to chris.brecheen@gmail.com with the subject line "W.A.W. Mailbox" and I will (eventually?) answer on my weekly reply.  I will use your first name ONLY unless you tell me explicitly that you'd like me to use your full name or you would prefer to remain anonymous.  My comment policy also may mean one of your comments ends up in the mailbox. I do not bother with the kid gloves if you don't sign your name.]

If you're not having a good time, I have a couple of suggestions for alternative activities. One might require a cloning machine, but I hear we have one of those in the basement.

Here's the deal. I have a couple of "notes" files of articles that I'm reminding myself I need to write and a lot of brainspace dedicated to future articles. A number of serial posts remain unfinished but I haven't forgotten about them or abandoned them (whether they are literary reviews of Skyrim or some of my own creative nonfiction). And there are far more entries for things like The Basics or Craft of Fiction that are yet to come. There are so many unwritten posts–so FUCKING MANY–that were I to experience some kind of trauma or injury or simply the all time mother of writer's blocks and stop generating new ideas....TODAY, it would be over three years before I finished up the backlog.

That means that if I only finish up loose ends, half written, and conceived but not yet put to pixel posts. If no one writes in a new question for the mailbox. If I don't manage to watch another movie and review it. If no news in Trump's America manages to invoke a Social Justice Bard response about narratives and sociolinguistics. If not one single new guest blogger ever steps forward. If no one tries to take a viral litsnob swipe at someone like Pratchett or JK Rowling. If I can't think of a single thing as the plot for Season 3. If I don't read a single new writing book or try out a single new thing of which I would want to do a product review. If I read no "lesser known" books that I really want to give a shout out to. If absolutely no ideas for a listicle  jumps into my head as a great idea for a post....

It'll be about 2022 before Writing About Writing closes up shop.

Frankly, I wouldn't count on that. I can get inspired watching those commercials they run at the gas stations while you're filling up.

Art and life are inseparable, and like life, you can declare that you've got it pretty much figured out or you can delight in the infinite complexities of endless variations on the themes.

How could you possibly claim to know everything there is to know about Loki's character if you missed one of the movies with him in it?

(Dark World and Ragnorok spoilers ahead)

If only there were some sort of central repository of knowledge that we, as curious media consumers, could access with all these new fangled machines that have become so ubiquitous and we are so accustomed to.  Somewhere where someone who was watching an "Including Movies" run of Agents of Shield and couldn't get the Roku to work would be able to find some sort of synopsis of The Dark World and read about Loki's tricking everyone into thinking he's dead so he can abduct his father, usurp his power while pretending to be him, and abandon him in a situation that will eventually lead to his death noble sacrifice.

But honestly here's me looking for the place where I claimed I knew everything there is to know about Loki. Nope not there. Nope. Not there either. Are you sure I claimed that? Because I know winning arguments is a lot easier when you are arguing against claims someone never made, but there is a name for that sort of thing.

Look I know what the real crime here is. I had the temerity to evaluate Loki on a scale other than "Awesome," "Totally Awesome," or "Tragically misunderstood but nonetheless totally awesome." People really like Loki and want to put that whole murdering entire cities, slave trading, totally would have murdered that guy who didn't kneel, multiple betrayals, was-about-to-sell-bro-out-to-slavers thing behind them because he cracks wise, sometimes makes tenuous alliances, and rocks the curved horn look.

I like Loki too. I totes do. Too many villains don't have that depth and nuance and you know too well what they're going to do. I REALLY like that he brings nuances of biculturalism and "otherness" to his portrayal. His motivations are more complicated, and I think that's really cool. But while he might be on track for some very interesting MCU redemption arc action, is certainly a complicated character, absolutely OOZES charisma with Tom Hiddleston behind the wheel, and has some very interesting change-of-heart moments, he does most things most of the time mostly because they are going to help Loki to acquire power.

As someone who's a literary major, maybe you should spell your literary references correctly. It's Chekhov, not "Chekov".

As someone who's a literary major????  Do math majors not have to spell theater references correctly?

This was an attempt to embarrass me because I should know better. How could I, a lit major, not have an eidetic memory with regards to the spelling of every major literary figure that I would have run across in the course of my studies. After all that's what I spent most of my four years of college doing right? It wasn't writing papers–it was spelling tests of notable figures.

It must really burn some people up when a guy like me shows up, someone whose dyslexia and ADD leads to grammar and spelling errors left and right, yet who still manages to get straight A's in his English major, gets invited to dinner with professors to discuss theses even as an undergrad, gets paid to write, and has a huge international audience.

"Why that guy doesn't even know his Jane's from his Texan cities!!! Balderdash!"

Since we're in the catty zone though, "Lit" stands for literaTURE major. Literary is an adjective. A "literary major" would be a high ranking officer in the army's book reading brigade. Also if you were paying attention instead of just giving your red pen a workout, you might have noticed that I was a Creative Writing Major so clearly I am simply lost without an editor. Though really, at the undergrad level, there's a lot of overlap, and they're all just English majors with various emphases. I still wrote rings around most of those lit majors though. Even if I misspelled some names along the way. Oh yes.

Because at the end of the day I can fix my Chekhovian flaws with two presses of a button (thanks Bee Tee Dubs), but confronting the sort of snide elitism that'll make someone try to shame a writer because their autocorrect recognizes Star Trek will take a bit more effort.
at November 16, 2017