What is Plot Driven (Mailbox) 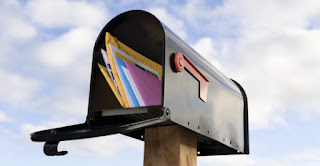 What does "plot driven" mean?

[Remember, keep sending in your questions to chris.brecheen@gmail.com with the subject line "W.A.W. Mailbox" and I will answer a couple a week.  I will use your first name ONLY unless you tell me explicitly that you'd like me to use your full name or you would prefer to remain anonymous.  My comment policy also may mean one of your comments ends up in the mailbox. JSYK, most drunk questions are NOT worth answering.]

I just got a rejection letter and I wanted to know what the hell does "plot driven" mean. (I might be a little drunk.)

(Note: Minor spoilers for Lord of the Rings, Star Wars, and Daredevil Season 1)

Well have one for me. That sounds like a rough rejection letter. Though if it was hand-written, instead of a form template, you might actually be closer than you think to being publishable.

This question disappeared from my inbox, but not from my mind, so I reconstructed it as best I can. Please remember if you send a question it might take me anywhere from a couple days to infinity to get back to it depending on its level of Awesome Sauce™. There are definitely ways to hedge your bets on a sooner-rather-than-later answer, and most of them don't even involve ash hauling.

But let's get back to your question, Doug. (I'm going to call you Doug since I can't remember your name from the original email. That's cool, isn't it.....Doug?) What does plot driven mean?

It means your plot is driving. *rimshot*

Because this question is sort of impossible to answer without understanding its opposite, let me also talk about "character driven." Because if you're getting a rejection letter that says your story is plot driven, what they are also saying is that it is NOT character driven. Even though isn't really possible to have a story that is completely plot driven and more than a little unusual to have one that is completely character driven, it is quite common to find a lot of great media that is a spectacular mix of both. (An undead army beyond the wall to the north is a plot-driven, external threat, but the six books of infighting among those trying to fill a power vacuum that is needed to confront that threat is totally character driven. A powerful space station that can destroy a planet is plot-driven. The roguish character who leaves the fight...but then comes back because of a heart of gold is character driven.)

These two tend to be less like dividing a pizza (where there are only so many slices and you either get plot [pineapple and Canadian bacon] or character [sausage with extra olives] and never the twain shall meat–Get it? Meat...instead of meet?....never mind.) and more like treble and base.

No no. Stick with me. I can make this work.

Turning one up doesn't eliminate the other, but it can kind of make it harder to notice. And while they both can go up to 11, you don't tend to get a lot of quality difference unless one is higher than the other, depending on what quality you want the "sound" to have. So what you've really been told is not that you have to abandon your plot, but that your plot is driving the story, and you need to adjust the "air/fuel mixture" a little.

It's a pretty normal problem to have too much plot. Certainly there are plenty of shitty stories that are just swimming in interesting characters but nothing ever seems to fucking HAPPEN, and there's no real conflict, but it's quite a bit more common when it goes the other way..

"Plot driven" tends to be focused on the external conflict and events. If there's a villain they are pretty much moving inexorably towards something BAD™ and not driven by motivations that play off against the protagonist. The characters are often reacting to what's happening in the world around them or by the villian. Imagine the plot as more of a roller coaster. You could drop Othello or Hamlet in there and it's going to go the same way no matter what even though those two characters are almost as opposite as could be. Your characters might be interesting, but nothing they do is really going to change what happens until the end when they defeat (or don't) the antagonist. You see this type of writing a lot in thrillers and mysteries, and it tends to focus on "plot twists" and quick thinking. And while character driven is more common in the literary genre (and seen as more "legit" as a literary choice by lit sommeliers) there is no shortage of character driven stories in any other genre.

Character driven tends to mean that it is the characters and their internal struggles that are moving the story forward. If Othello and Hamlet switched out their circumstances their plays would each be over in half an scene each. What ends up driving the story is not so much how they immediately react to what is going on but how they process and internalize it. Instead of a roller coaster, think of a car in which they could make turns or drive off the road completely. Consider how Boromir's character changed the entire trajectory of Lord of the Rings (which has a lot of plot driving it) or how the final conflict actually occured within the hearts of a couple of the characters and was only minimally represented in the hack and slash bid for time. There was no last boss fight between Aragorn and Sauron. Frodo failed. And the only reason Sauron didn't win was because of another character utterly corrupted by the ring.  The main conflict in a character driven story is often within one of the characters–can they overcome some sort of personal flaw.....or not.

The thing is, character driven tends to be more impactful as a story, and it's the direction that media has moved over the last century. We are all happy that Lando blew up the second death star and Han blew up the shield generator, but what apparently really resonates for us as a culture is less all that blowing up stuff and more the choice that Vader made as a father. And while stories of good vs. evil will always be cultural touchstones, increasingly audiences are enthralled by complicated stories of characters rubbing up against each other in ways that completely change the story, and that sometimes both sides of a conflict are sympathetic and relatable.

So if you have a Strong Female Character™ with a sword, ask yourself this question: "Would ANY Strong Female Character™ with a sword (and a comparable level of skill) go through essentially the same story or does this SFC™ make some choices that only THIS SFC™ would make. Does she go around a threat because she hates physical pain? What happens then when she gets tortured? Is she toughened by this experience or nearly broken? How does that affect her willingness to go on? Is she hard boiled badass who doesn't give a crap about anything but revenge? What happens then when her choice is to kill the Big Bad™ or save the child? How do the consequences of that decision unfold?  What happens in the story that changes the character? How?

This isn't just about how a character behaves as they're going through a scripted series of events either. Sassy characters mouthing off to BadGuy_12 and gentle characters trying to urge restraint from BadGuy_12 might be "turning up" the character driven a little, but if BadGuy _12 does what they were going to do anyway, it's still Plot Driven Land. An obstacle laden dungeon that unfolds like a video game where all the dialogue options lead you eventually to the same results and same three final battles, is Plot Driven Land.

I've been watching a lot of Marvel shows on Netflix lately (I'm way behind, but they're pretty good when I do sit down and watch some TV). They are also great examples.

Consider how much of Daredevil Season 1 involves the interplay between two foil characters. A lot happens, but much of it because one character or another CAUSES it to happen for motivations we understand as the audience. Both are violent. Both care about their community in a way that they are willing to do almost anything. Around the same age, each loses their father. But one is a killer who sees the people around him as a means to an end rarely doubts himself except on a personal level, and the other teeters over that abyss of morality but comes back and is generally supremely self confident on a personal level but constantly questions of his larger vision. They exist as foils and characterization chiasmi.

Consider as an illustration of character driven, how much differently would, say, The Punisher, handle Wilson Fisk if he weren't (as Matt Murdock was) essentially worried about his soul and fighting that base compulsion to hurt someone for vengeance sake and/or commit murder. Don't just imagine The Punisher using a rocket propelled grenade on Fisk's face just in the final fight or compare their ability to kick ass or gather intel. Actually start back at the beginning and imagine how The Punisher's sense of vengeance rather than protection of a community would shape his behavior from the very first moment of the very first episode. It would become a completely different story of an escalating cycle of violence rather than one where each tries to outthink the other's motivations and the ongoing internal question of whether he was doing the right thing would be completely absent from a story in which (with Matt) it was a central theme. Rather than a story about the soul of Hell's Kitchen and gentrification it would be a story about how Hell's Kitchen was collateral damage in a personal war.

Now consider what would happen if Jessica Jones were put into that situation. Five fricken minutes after the opening fight scene, she would be back in her office, pulling liberally on a flask and (successfully) talking herself out of the idea that it was even her problem.....unless she had a personal stake in it.

So I don't know what your story is about, Doug, but perhaps it's time to let your characters drive a little.