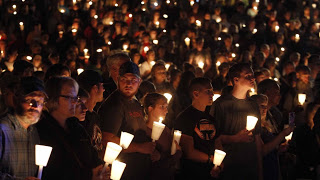 "It is difficult to get a man to understand something, when his salary depends upon his not understanding it!"


So let's start by saying that yes, I am angry.

I am very angry.

And I'm sure some will use my emotion or my sardonic wit to try to delegitimize the substance of this post. ("I would absolutely have engaged in good faith with an article that was completely emotionless, but CLEARLY he isn't even trying to not be biased because of those jokes...")

Let them delegitimize it, scoff, sneer, snort derisively, and claim that it was the tone they didn't like. Whatever. This isn't about them any more. At this point I've given up any hope of convincing people who have decided nothing will ever convince them. I'm done trying. I can work around them.

Like someone who is done fighting, and finally ready to leave a relationship, I am just fucking DONE with the bullshit.

So don't expect this to be "reasoned debate" over brandy with calm and disinterested parties–each using the mere hint of some kind of fallacy to whack-a-mole checkmate the other. ("Oh Chad. Was that slight an ad-hominem. Bad form, good sir. Bad form.") But this isn't about debate. Debate is in the rearview mirror.

Largely though, it wouldn't even matter.

This has become a partisan issue surrounding increasingly intransigent folks who perceive the slightest restriction as a threat to be quashed and who, with each mass shooting, have become even more intractable instead of more willing to consider solutions (outside of turning the whole country into civilian militarized zones). And while there is a moderate group of Republicans who have begun to join the left in begging for sensible gun control laws, they are not able to get past the vocal minority, their party's vice grip, and an NRA lobby.

The latter have relinquished their right to reasoned discourse by refusing to even come to the table. Like much of the party with which they have a symbiosis, they have decided to forgo debate, discussion, incremental change, or compromise in favor of the politics of power. And that party to which they have adhered themselves is increasingly engaged in slick cheats like gerrymandering and voter suppression, grotesque amounts of dark money, and scorched earth politics and will absolutely positively not do anything but crawl over each other to ingratiate themselves to the NRA's ever more intractable position that no limitations of any kind are ever acceptable.

So let me start by divesting you of the notion that I am an enemy of firearms. I have handled guns, fired guns (and done quite well at it), enjoyed desultory good-guy gun fantasies. I've owned guns. (I don't currently.) I have nuanced views on gun control. I'm beginning to think the left really ought to arm itself given the political landscape of our country and which side cops are increasingly on. I know plenty of leftists, trans folk, people of color, and members of other marginalized groups who are just as happy as not that the ability to defend themselves is easily purchased from the corner store without bureaucracy that would undoubtedly target them. I want to come to some kind of reasonable compromise regarding personal protection and hunting, but also make it harder for school children and other bystanders to be murdered en masse. As of this moment, technically, I still don't want to take all the guns away (though I'm in a shrinking majority). I would love a conversation about sensible, reasonable regulations.

Because every fucking time the the politicians on the right essentially sidestep any possibility of a discussion of tighter restrictions and more regulations lest they bring down the fierce political retribution arm of the NRA who will silence any conversation in favor of the politics of power. The NRA, far from merely being hostile to anti-gun politicians, will "primary" an incumbent who dares to consider any sort of restrictions or compromise. And perhaps more to the point, every time gun OWNERS allow the NRA and politicians to speak for them on the issue––an NRA who represents gun manufacturers (who want to sell more more more guns), not gun owners––the praxis message that ends up shouted from every rooftop is that there will be no discussion, no debate, no compromise, and no reasonable limits.

Not now. Not ever. Not on their watch.

And by letting these utterly intransigent groups take point in every discussion, any moderate is ensuring that the only solutions are scorched earth solutions.

The NRA began to shift its message and the intensity of it in the 80's and 90's, and hit fever pitch when the sunset clause of the Brady bill took effect. Their modern incarnation with the well established, predictable response to mass shootings is a relatively new development.

We––we who would like some sensible gun laws––are begging, in fact pleading, for a conversation....and the door gets closed in our faces. Every. Single. Time. And most of us (but not all, thanks in part to that absolute inability to compromise) don't actually hate guns. But when we ask for some sensible regulations, the head of the NRA goes on the attack and says such a thing is only ever done by those who "hate freedom".

Here's a quote from Wayne LaPierre, the head of the NRA.

"The elites don't care not one whit (sic) about America's school system and school children. Their goal is to eliminate the Second Amendment and our firearms freedoms so they can eradicate all individual freedoms."

Okay, forget for a moment that the anti-semitic dog whistles in the larger speech were shockingly overt and reveal a powerful lobby that is essentially advocating for armed white supremacy (*cough*), that's not some rando on 4chan or Reddit or some fringe state senator from Kansas who got quoted as outrage porn to make a Facebook post go viral. That's the head of the NRA (talking mostly about the political mobilization of the survivors of Parkland) saying that anyone who is asking for waiting periods, smaller clips, banning bump stocks, and a tougher road to owning a semi-automatic assault-style weapon "hates individual freedoms" and doesn't really like kids either. Grab your skis folks, the slopes are EXTRA slippery today!

In what world would a political operative even dignify such a bad faith presumption about those who want some sensible gun control. Republicans fell into the mud weeping openly at the word "deplorables" (after a solid decade of hating "PC speech" and telling snowflakes to fuck their feelings, but maybe that's another article), yet suddenly it's no problem if a national player is saying shit like this? And instead of protesting en masse, cancelling memberships, or calling for retractions, or even just turning in on themselves with their "let's hear their side" tut-tutting, far too many gun owners and GOP politicians just nodded along and let the NRA go right on being their national mouthpiece. ("Sure. Fucking Jews hate America and just use seasonal school shootings as a pretense to whip people into a frenzy and gut civil rights because they hate America and it has nothing to do with making kids safer. Sounds perfectly reasonable to me. Hand me that annual dues envelope, would you?")

Instead of communication, pro-gun folks follow the NRA (and those politicians the NRA owns), allow the NRA to speak for them, and parrot the NRA's talking points no matter how ill-supported or morally dubious. They typically wait a few days in which they tell people not to "politicize" the tragedy, and then start lobbing out a couple dozen well-worn, classical, hand-tooled, boilerplate narratives that operate chiefly like a ninja smoke pellet–distracting and confusing while they slip away to wait out the outrage and elect another politician who will tweet "Thoughts and prayers" while not even considering the slightest legislation, and become even more calcified against any regulation.

I don't hate guns. I'm not repulsed by gun culture. I don't call people who like guns "ammosexuals" or claim they all say "Yee haw" when they pull the trigger. I don't snidely claim that these are men's "toys." I know people who use guns responsibly and people who WOULD NOT BE HERE if they hadn't defended themselves with them. And I'm not wholly convinced that the left might not need to learn to use them before our current political landscape has played itself out.

I just hate the really terrible, terrible arguments and the fallacious narratives we see every. single. time. there's a mass shooting (and particularly a school shooting), and I hate how gun advocates and the NRA use like they are mic drops (instead of widely debunked bullshit), and then go and congratulate themselves for "giving it to some liberal snowflake."

It's time for these folks to stop acting Pikachu-meme surprise that the left and moderates have given up on this as a debate and are just gathering the political will to act without compromise. People who care about these issues are starting work around intractable gun advocates and the NRA, dismissing them, "meanly" characterizing them. They fall down like wounded men's soccer players when their bad faith fallacy-o-thon's that are LITERALLY excusing children's murders are no longer treated with utmost decorum (as if these paint-by-numbers "arguments" were ever offered up in good faith) by a growing group who finds the body count too high a price to pay for gently engaging their smug derailing.

If you're a gun aficionado who is wondering why all your best spaghetti isn't sticking to the wall with liberals, welcome. I can't promise this is going to feel good. But otherwise, this post isn't here to try and be diplomatic. You want room 12A just along the corridor.

This is about exposing those narratives. It's about anyone who is still actually listening. It's about the few who are still willing to have a conversation instead of hiding behind the shitty slogans and flawed reasoning. I don't know what the answers are or exactly what legislation we should be enacting, but I do know what a flawed or fallacious narrative is when I see one.