Folks apparently it was ambitious of me to think that I was going to post anything (more than something like this) on a transit day. Technically I was ready to rock, but I tried to pay for internet on my flight with PayPal, and PayPal wanted me to answer a security question which WOULDN'T LOAD because I didn't have internet....

So this was me: 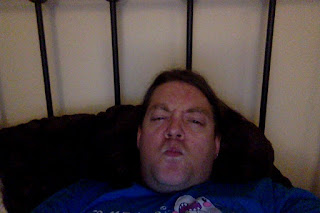 Except with less bed frame and pillow behind my head and more plane seat, peanuts, and discomfort. (Though on the bright side, the deity in charge of flying–who certainly can be both capricious and cruel–must have taken pity on me for the missed flight and middle seat discomfort from Thursday because I had the only row on the whole flight that had no one in the middle seat.

Regardless now I'm up to (and I'm not even kidding) like seven half done posts, so at least starting tomorrow, I'll have no shortage of things to say for a while. On my WAW Facebook page, I'm going to repost the link to our latest call for poll nominations (best modern science fiction) since that went up late on a Saturday, but for everyone else I'll just let you know that it's there.