You Can Have The False Dichotomy, But I'm Keeping The Word 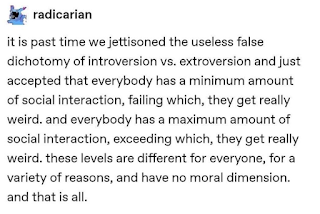 I think it's been a year. And because of memories, I'm going to have to watch that anti- "introversion/extroversion" meme going around again. (Every year for a while now.) And since I'm currently trying to pull-start my writing engine like an old lawnmower, anything I can get a little amped about is a blessing. Even if a cursory survey of some of my friends indicates that I might be standing against high tide on this one.

I like the pushback against the false dichotomy and the lack of moral dimensions, but every time this wanders across my eyeballs, I am a little less enthusiastic about the middle and its apparent attempt to eliminate the terms themselves. It may not even have been in the mind of the author (radicarian), but it has sure been in the mind of many who reposted it. I'll own that baggage, and maybe I'm tilting at windmills, and bringing way more to the table than is fair, but I think it has been A Thing™ dealing with folks trying to erase something I find meaningful, useful, and important, for long enough that I'm ready to hit this thing with a nuance beam, unpack the bullshit stuff (of which there is MUCH), and die on the hill of the word itself.

Personally, I'm a raging fan, of the term “introvert” and the way it articulates a different dynamic through which I interact with the world from most.

If folks are powerfully middling or a term just doesn't work for them, it's really okay to just NOT use that term for themselves or tell everyone that the dichotomy isn't good for defining them. (Although it’s worth mentioning that the idea of the “ambivert spectrum” with introversion/extroversion respectively on either end brings a continuum to the dichotomy that seems to deal tidily with the “false dichotomy” in the meme’s complaint without the rather blunt-force solution of getting rid of two perfectly useful words at either end.) It’s not necessarily cool to project one's own disinterest onto everyone else, and taking it away from people who are like "OMFG!!! It's me! I never knew there was a name for it! I feel so seen!!" is only like # 612 on the comprehensive list of dillhole moves.

There's a bit too much of "This doesn't work for me, so therefore it doesn't work...at all." in the world already.

I'm also not a radical or a fascist (though some who are either might certainly label me as the other), but I don't argue that we should just abandon these terms and say that people are just "a certain amount of liberal until they're not" or "a certain amount of conservative until they're not." Those terms explain things to us about just how conservative/liberal they are and how they may interact with the world differently than others.

Personally, I'm a raging fan of the term “introvert” and the way it articulates a different dynamic through which I interact with the world from most. I thought I was shy (I am, but only with new people), had social anxiety (I don't), and was a misanthrope (also no) until I started running into this term and what it meant. Suddenly, I made a lot more sense to ME. I felt seen. I felt understood. I felt less like a troglodyte in a cave hissing "Leave me!" at anyone who wandered in. I found comfort and ease in a term that described my quirks (in the same way I felt comfort about A.D.D. or non binary gender). I generally recharge alone and am drained by being social. Some people generally recharge socially and are drained by being alone. Most are in the middle, and probably feel like this is much ado about nothing.

I happen to be over on one side of the bell curve. That's it. Obviously, there are limits to how much I can be alone, and I'm sure there are limits on how much other people can be social. But it is a good descriptor (a signifier if you want to get all linguistic up in here) and it's useful to have a term that quickly and easily indicates which side of this spectrum one is on. But it is such a relief to me to know that I'm not some socially borked pariah.

I just need alone time to recharge my batteries.

I totally get that the rash of introverts making up shit about how they want to "actually have 'deep conversations'" or "don't talk all the time" needs some push back right in the face. Come on! No one gave out extra deeposity to introverts. What the fuck kind of elitist twaddle is that? Everyone looks stoic and wise when they say two sentences a day (look at Silent Bob) but trust that having a filter or not has NOTHING to do with how often you talk. (If anything the extroverts might have more practice not blurting out the quiet parts.) That fucking crap is obnoxious and needs to be kidney punched. Introverts can be shallow. Extroverts can be deep. Neither one of them is more "evolved" at socializing. Introverts aren’t NICER. Extroverts aren’t impolite. Stop it!

Of course there's no "moral" dimension.

Let me say that again: OF COURSE THERE'S NO MORAL DIMENSION.

Unfortunately, introverts make up a lot more of the writers and the shitposters, so we're often running the table when it comes to the narrative, and we like to frame us in a good light. But rejecting the whole thing because a few of us are being dillholes on social media doesn't mean our self-identity is meaningless. It just means a few people need to have a tall frothing glass of shut the fuck up and stop thinking that people who actually ENJOY chatting and talking are in any stretch of the imagination beneath them instead of just different.

Which isn't to say that this meme is doing a bad job at describing what introversion and extroversion MEAN, and if folks mostly just want to take away the Myers/Briggs idea that you’re either one or the other and ne’er the twain should meet, I’ll be the first in line to help you knock down the statute, but you have to stop there. YOU HAVE TO STOP THERE!  You can’t start talking like the terms themselves aren’t working.

The place where my nod turned into narrowed eyes and tables began to telekinetically flip all around me was at the idea that the terms are useless. Eliminating the terms THEMSELVES makes about as much sense as saying, "Why don't we remove ‘tall’ and ‘short’ from our vocabularies, and just say that there is a certain height that people are, and some people stop existing sooner as you travel up, while others can't go on the roller coasters until they’re pre-teens––why do we need all these labels?" And then we lose the ability to say, "This ceiling is too low for tall people" and have to start specifying the exact height at which the ceiling becomes an issue every single time we talk about it with no linguistic shortcut. Double plus ungood if you ask me.

Seriously though. Joking aside, that's not really how language works. We are linguistically lazy, and go for the shortcut every time. I mean, look at us saying "Bye" when the phrase is "God be with ye." (Shortened to “Godbwye," then to “Goodbye” and then "Bye.") Because saving that one second is super important and probably after thousands of "Bye"s added up to at LEAST one extra episode of Avatar: The Last Airbender by the time we're pushing middle age.

I'll just fire that up now.  Surely in this episode the cabbages guy will be okay....

I also get just a little head-itchy when people want to start removing labels for how folks interact differently with the world than the "acceptable party line.” Just because most folks sometimes want to party and sometimes want to stay in and read doesn't mean they should extrapolate the whole of humanity as finding edge labels as useless as they do. I do wonder why they can’t just work around terms that clearly resonate (often with great shared enthusiasm initially) among those identifying and naming that difference––as well as suddenly relating to those who have experienced the same different-ness in their own lives.

But then that's something we DO a lot, isn't it? We dictate the ways in which others must interact with the world by shaping the language that is considered "right" and "proper" and "allowable." This same impetus leads to a lot of denial of neurodivergence or non-binary sexuality and gender. And I know too many folks who get that lightbulb moment reading about something after an entire difficult life of being told they were just broken. (”Why do we need all these labels?" and "We all have trouble concentrating sometimes, so maybe you're just lazy. Time to buckle down.”) Strip away all the Tumblr posts going viral about how introversion is some kind of superpower (it's not) and I’m willing to bet the farm you’re going to find a lot of folks who lost too many years being pushed into social situations and told they need to “get over it.”

Might be worth thinking about before folks pluck the label someone is squeezing to their heart like their favorite stuffy and tell them it means nothing.

So sure. Have the dichotomy and absolutely have the false dichotomy.  (We have been talking sliders, continuums, and “ambiverts” for a while now anyway.) But this introvert's introvert is going to bristle when the implication is folded in that the words themselves are not doing anyone any good.
at May 26, 2020