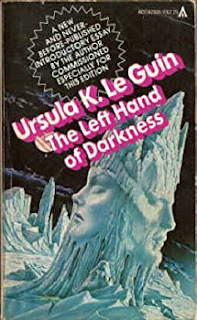 What is the best stand alone Classic Science Fiction Book (published before 1980)?

We've done best classic fantasy. Best modern fantasy. Best modern Science Fiction. Best science fiction AND fantasy that could have stood alone (but didn't). So now the only category left in this series is stand alone classic science fiction. (We'll start doing series and stuff soon.) As always, remember to take your recommendations to the comments on the blog if you want them counted (not as replies to the posts on FB or other social media.) And though the rules don't change much if you've done a lot of these before, please check them out if you're new or need a refresher.

I spent the weekend (and yesterday) in a final push of moving and cleaning, so it's a good day to start up our latest book recommendation conversation while I take a moment to catch up.

These days we've given up on those cutthroat polls (where the most recent movie adaptation with the slickest CGI usually ends up winning anyway) and instead we're just going to have a good chat about good books and all come away with some suggestions for our To Be Read™ pile. We'll still have the system of seconds (and "thirds" and "fourths"), but all that will determine is which goes to the top of the list when I post the results. You can go HERE to see what the results will look like when all is said and done. And I'll link out the original nomination post for folks who want to go see what people are actually saying about the book. Eventually these posts listing the results will be compiled in a massive "book recommendation" post.

Today we're doing stand alone classic science fiction. Those books that are not part of a trilogy, a series, or massive world building universe, but nonetheless are outstanding examples of the sci-fi genre. And since this would turn into a massive list if we did all science fiction ever, we're going to break it up into modern and classic. Today is classic—written before 1980.