Mailbox: Phoning It In 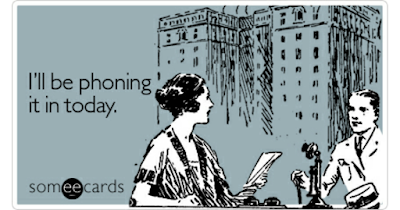 It seems like you're phoning it in a little bit the last few weeks. I'm a patron who wants to give you money for the hard work you do, but I'm worried when I see the level of work is slipping. This is my hard earned money. You haven't even been as good about memes and stuff on your Facebook page.

I've ABSOLUTELY been phoning it in a little bit in the last few weeks. And there's at least one more to come—and THAT is if I'm absolutely healthy.

Let me give you some context here, Mark. On Monday I spent 2 1/2 hours at (and in transit to) an iron infusion. That's where you go to the oncology and hematology center, sit down in an infusion room surrounded mostly by people in various stages of aggressive chemotherapy, and the medical team pumps iron directly into your blood through an I.V. This procedure, though it has perked me up long term, caused me to need extra sleep immediately after. It also kept me up that night dealing with an issue of which the fewer details I share, the better. Then on Tuesday I went to a consult for another procedure that took two hours. Wednesday I got a Covid booster, and that only took 30 minutes, but I noticed I needed some extra sleep over the next day and a half—I have no idea if that was the Covid booster or ongoing from the iron infusion.

All told, I probably lost about 12-15 hours to medical stuff this week. I can write an entire "meaty," Friday-caliber article in that much time, complete with editing and some really good snarky images.

And this was actually my easiest week in nearly a month.

Patron at at least the $3 level should have gotten the newsletter about what's going on and why I missed some post (and might miss a couple more). I'm in treatment for iron-deficient anemia AND my primary care physician has me seeing multiple specialists who are each doing doing a bunch of tests, all to see if they can figure out the underlying cause. I'm in appointments two or three times a week, getting blood drawn constantly, and before they realized I wasn't going to be able to take oral iron supplements (hence the infusion), I was in a debilitating amount of pain and having a lot of rough GI symptoms from the pills. And I'm leaving out the parts where I am stressed and nervous and having trouble focusing because one of the possibilities that might be on the table is actually cancer.

Look, one of the things I try to be super forthright about here is that you're getting to see the whole messy process. Not every day is going to be machine caliber productivity. I'm human, so you're going to get to see the ebb and the flow. (And right now is definitely the ebb.) I'll keep writing—and as much as I can—but some days/weeks/months are better than others. Shit, the last two YEARS I haven't been my best. But I have good weeks and great days and I won't be dealing with all this anemia bullshit forever.

I will be dealing with it next week, however.

Next week is about the same number of appointments, including some "-oscopies" that I'm really not looking forward to, so I wouldn't expect things to be much better until at least mid-November, but unless those scopes find something scary, I'll be done for a while, and I'm hoping to be back to my regular schedule. I'm also planning on getting a post up on Monday (my usual day off) to make up for the missing one this week. It was going to be today's post, but your question seemed like it was something worth addressing since a few people have asked about it.

I promise you that I'm probably more acutely aware of my productivity than most of my Patrons combined. I'm back behind the woodshed beating the crap out of myself because of internalized capitalism and the "productive = moral" culture I'm swimming in.

I know that the crowdfund model (rather than paywall and exclusive content) and being so transparent about the day-to-day obstacles mean that when something goes pear-shaped, my slow periods are going to be on gruesome display. You don't get that with most writers. They just drop a post when they have one and who knows what was going on behind the scenes.

I know from experience that some people are going to feel like I'm not doing enough during those times, or that they're not getting their money's worth because they thought my "flow" output (when I'm really cranking) was going to be a baseline and never change. And while I absolutely adore folks who make it clear that they'll stick with me as an artist through the ebbs (because they know the flows are coming), I absolutely also respect everyone who's supporting my work financially, and I absolutely support their legit right to withdraw that support when I'm going through a less prolific period. (It's the downside of being crowdfunded—I don't get medical leave.). I just sort of hope they come back when I kick it back into gear.

But if would-be writers take anything from this, let it be this: writing is a marathon, and the posts are still coming. Whatever is going on, I do not STOP writing. You can have bad days and still keep moving forward. The body of work grows. And when I'm healthy, the prolific writer some of you have come to expect will be right where they always were.