We Will Be Right Back After These Messages 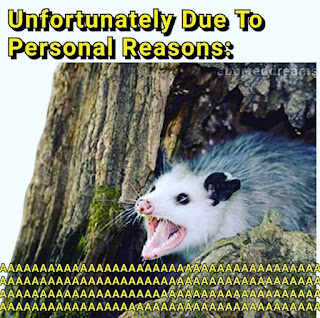 My patrons got a version of this a week ago. They tend to get news like this sooner since it's their support that keeps the rent paid. But I still wanted to make sure that everyone reading, and maybe wondering what was going on, knows what's happening, why there have been very few posts, and what the timeline for a return to normalcy might look like. Writing About Writing isn't going away, shutting down, or going to be on break any longer than is necessary for my recovery from surgery.

I think I'm about 97% unspooled at this point. I might have three percent but it actually comes and goes. Last week, I was at least keeping up a sporadic sense of togetherness (even though I wasn't having good DAYS anymore, and had begun to focus on good HOURS), but now I’m completely in crisis mode, everything is focused on just putting one foot in front of the other, and if I get twenty or thirty minutes between . I’m a mess, and I am having an impossible time writing much more than raw, unfiltered emotional splats. I think about blogging, and I stare at the blinking cursor as the hours go by.

The last thing I want to be is a crowdfunded content creator who pauses the content. That’s a very uncomfortable place for me to be as someone with exorbitant medical bills coming up. (I’ve never wanted a regular, salaried job, but AT THIS MOMENT, I sure wouldn’t mind being able to take a medical leave of absence.) But I can’t keep going right now—I have to focus on my health. I’m going to have to put the blog on a (brief) hiatus to get through the surgery and initial recovery. I’ll just have to worry when I get back about what needs to be rebuilt.

It won’t be long before I won't have much else to do BESIDES sit in bed and write blog posts, but for now I have to focus on getting there. My surgery is the 16th. I’m in the hospital for, they hope, two nights. After that I’m home, but probably mostly out of it on pain meds for at least a week or two. Then you'll probably see some status updates, quick posts, a wrap up of our current YA horror book recommendation, and a guest post or two from my most recent call.

My hope is that after Christmas, you’ll start seeing some updates trickle in. But officially, I’m going to say that we’re on hiatus until January—maybe the second week or so if there are no complications in surgery and my recovery goes well.