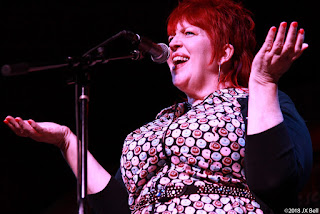 Rhapsody has a performance tonight at Bawdy Storytelling. (If you're near San Francisco, it's a fun event.) A musical guest brings in and out the show (as well as another number after intermission). I'm actually IN the last song, but my part is tiny. This is Rhapsody's moment.

I've been doing some rehearsal, but mostly it's been a supportive role. As an artist, and one with some stage experience myself, I'm all too well aware about how things feel in those days and hours leading up to the biggest performance of one's life. If anything, writing has been a great relief on that front. I've found a much bigger audience, and done my most impactful work through writing, but I never quite know which "performances" are going to turn out to be my most important. I don't have time to fret and stress. I just find out after the fact that twenty thousand people read something.

I also wrote a post on NOT Writing About Writing. It's about all the running I've been doing lately and introduces a new series that I'll be putting there.