The SHOWDOWN Results- On Friday, July 27th as Chris Brecheen was leaving work, he spotted Leela Bruce across the foyer.  Her eyes narrowed, and the manager of building maintenance was actually lifting his radio to tell everyone to transform the amphitheater into Thunderdome when Leela gave a tiny, almost entirely imperceptible nod, and the whole staff at Writing About Writing gave a small but collective sigh of relief since the guy that signs their paychecks wasn't going to be killed on Monday.


In June I stopped posting every day, and you can see how things went down (751), but they've crept back up, and are still growing.  Considering that this is the first high traffic month that didn't involve me forgetting not to track my own page views (March), putting up a picture of myself and asking for feedback (May), and where I didn't post every day, it's an extra good bellwether.

I know it's chump change in the Blogoverse--some blogs make 6000 hits a day on days they don't even post, but watching that number keep creeping up makes me happy.  Thanks to all who have given me props on FB or G+ (or anywhere else) +1'ed posts and generally made this possible.  You guys are awesome with awesome sauce, a side of rad, and a tall frothing glass of bitchin.  (Plus some Fucking Epic for dessert.)

On Monday you can expect to see some actual fiction going up.  Plus the last few changes to the "ground floor" that I've got planned next week.  Also, I'm going to break down and start tagging (sigh), so that it's easier for people to look through old entries.

I'm still hoping to get some guest bloggers up in here.  If you want to write a piece on Writing About Writing (even if it directly contradicts something I've said), I really want to hear from you! 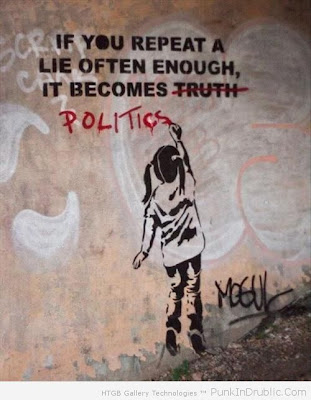 The person who has it in his mind that he will write to engineer better human beings is a despot before he writes the first line.

Though the week's thesis of the wisdom of avoiding politics has been more about the pursuit of partisan and direct politics through the political engines of the day and that one can be political, even very political, without being involved in politics or conjoining oneself with those who govern (or intend to), it is important never to lose sight of the fact with a more broad definition of "politics" a writer is always political, and must be political.  For the writer engages in one of the most political activities ever.  The spread of new ideas.

Romy Clark, Roz Ivanič explore this idea in their book The Politics of Writing.

George Orwell, who wrote at a time when structuralism was seen as maintaining the status quo and a linguistic form of the fallacy called Begging The Question, goes so far as to say that language itself is political in his essay Politics and the English Language.

So we've been quoting Richard Bausch all damned week since his words are emblematic of the issue of writers and politics.  Here is what he actually wrote on the matter.

Eschew politics. The person who has it in his mind that he will write to engineer better human beings is a despot before he writes the first line. If you have opinions, leave them out of the workplace. If you have anything worthwhile to say, let it surprise you. The writer John Gardner once told me, "If one of your characters makes a long speech filled with his deepest held beliefs, make sure you don't believe one word of it." I think that is very sound advice. You are in the business of portraying the personal life, the personal cost of events. So even if history is part of your story, it should only serve as backdrop. The writers who have gotten into trouble with despots over the shameful history of tyranny did so because they insisted on not paying attention to the politics except as they applied to the personal lives of the people they were creating. They told the truth, in other words, and refused to be political. The paradoxical truth of the matter is that a writer who pays attention to the personal life is subversive precisely because he refuses to pay attention to anything else. Bad politics hurts people on a personal level and good writers report from there about the damage. And the totalitarians are rightly afraid of those writers.  --Richard Bausch

From the larger work which I've seen titled as Ten Commandments of Writing, Letter to a Young Writer, or simply as Dear Writer.


[Do you want to be featured in potpourri along with a few words from me about how awesome you are?  Do you know a great writing link that I should share? Please send it to me at chris.brecheen@gmail.com, and I will post it along with a shout out singing your praises (unless, of course, you don't want one).  There are four caveats to this.  Please read them before you send me stuff.  If I've posted anything that you feel is "yours" (or "your client's" --eeep!) please just tell me what you would like me to do.  Most everything here that doesn't have an embedding code within its source is some kind of meme, so it would be quite difficult for me to do proper attribution.]
at July 28, 2012