The Lying Truth (Politics and Writing) 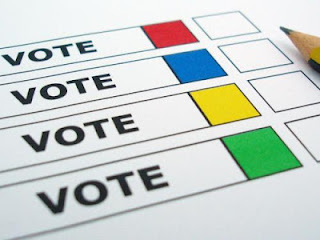 
Richard Bausch isn't the only writer who says to avoid politics--he's just one of the only ones to come right out and say it succinctly in his "ten commandments" of writing advice, so he gets to take the flack.  Lucky you, Richard!  However, you can see a similar sentiment echoed throughout successful writer's quotations and interviews.  Even intensely political writers--feminists, radicals, and cause oriented writers--will say the same thing about politics.  Even writers who are involved in political movements sometimes say the same thing?  How does this all jive?  Or do all these writers have a bad case of political activism sleepwalking?

Writers don't exactly have responsibilities.  Well, I have to do the dishes and clean the catboxes, or my roommates will flay me, but I mean writers don't have a lot of responsibilities AS writers. Not hobbyist writers like me, anyway.  If they love to write, they write--and they write whatever they want.  They write their secret masturbatory fantasies about killing every single worker at the DMV into their moleskine journals at night. And perhaps some of them even work on getting better and hope one day to make a living with it.

But when a fiction writer interacts with the world around them, they do have a few responsibilities they have to take seriously if they want to be TAKEN seriously.  One responsibility is to respect writing.  You can have a great sense of humor and irreverence for nearly everything, but you have to come to the blank page with a certain respect for the power inherent in writing, and the incredible difficulty involved in wielding that power with any proficiency.  If you don't sit down and think "Shit just got real" (regardless of any other mood or disposition), you will never be able to harness that power.  However, after that level of respect that all writers of any merit seem to share in common, if a writer could be said to have any single duty or responsibility at all, it would be to the truth.

The writer's relationship with the truth is why politics are such tricky ground.  It's not that writers can't lie. Come ON! A fiction writer lies from one end of the book to the other.  But they lie in order to tell the truth.  Within fiction, within that hodgepodge of shit that never actually happened is the truth--on every page--about people, about life, and the world around us.  If there were no truth, even in a work of fiction, it wouldn't compel us at all.  Animal Farm doesn't see us turning page after page as our horror grows because we think some actual farm somewhere was taken over by talking animals.  It does so because we see the corruption of a political movement, and the human reaction to power.

The fiction writer uses lies to tell the truth.

Now...I don't mean to be a total disillusioned punk, but if you watch politicians spin stories, take quotes out of context, and massage statistics in order to support their overarching narrative of "us vs. them" it would seem like their job is exactly the opposite.

Politicians use the truth to tell lies.

Like the pigs of Animal Farm, the truth would be anathema to many political movements.  I'm not saying every politician as bad as those pigs, but politicians of any stripe don't really do so well with the facts that don't agree with them.  (And really, can you blame them?  Look what happens if they get new information and change their minds: the fact that they haven't stubbornly held to the same view for 20 years despite evolving evidence gets turned into an issue of integrity.)

Of course, the truth can be an INTENSELY political thing, as anyone who has ever blown a whistle or tried to uncover a conspiracy knows.  Woodward and Bernstein became enormous political actors the moment they started investigating the truth of Watergate.  But politics is not inversely as intensely truthful, as anyone will grudgingly admit about "their side"'s ability to lie and distort, and almost all will accuse the "other side" of doing at every opportunity.  A writer seeking truth may stumble into politics, but that's not the same as starting there.  It's the difference between Picasso's Garnica and those WWII propaganda posters when discussing visual arts.

Politics does not concern itself with truth.  It is ideological--even when it's wrong, and it is much more concerned with winning than accuracy.   People engaging in politics are much more likely to argue to win than they are to get to the truth.  Really, anyone arguing probably is more interested in being right, but it is particularly true in politics. Of course, if you've ever been on a political forum online, this probably isn't any kind of shocking revelation.  Those people would rather be right than anything in the entire universe, including (apparently) ever getting laid. Rhetoric and propaganda are the tools of the politician.  Politicians are so transparent about altering the truth to suit their needs that they affectionately call the process "spin."

See, politics involves huge levels of cognitive dissonance. When people who are very political start are strapped into an MRI and start talking about politics, the same places in their brains light up as when religious people start talking about their religion.  And that place is a place that is highly emotional and almost completely irrational.  It's a place that literally can't evaluate information for its quality.  We logically evaluate facts in a completely different place in our brains.  Consider that for a moment (preferably in the non-religious part of your brain).  People are very, very (VERY) prone to seizing on facts that agree with their political beliefs and ignoring facts that don't agree with their political beliefs just like they are about seizing or ignoring facts that agree, or not, with their religious beliefs.  This common human condition is called confirmation bias, and disconfirmation bias respectively.

A writer can't afford that.

A writer can't hold back because it might cost votes come November.

Writers are already tragically human.  We are.  (Despite our god-sized egos that bruise more easily than genetically enlarged red delicious apples, we are mortal to the last.)  We already have biases we can't ever completely get rid of when we write.  We already suffer from blinders.  We already have political prejudices and preferences.  We are already doomed to fail somewhat in our portral of other genders, sexes, cultures, races, ethnicities, creeds, religions, or ideologies.  It is already hard for a writer to step out of themselves and into the paradox of other paradigms.  We already have to work almost unbelievably hard to really get people who are different than us and understand them. We already are all tragically flawed and sucky and sadly un-omniscient.   If, in our effort to write the truth, we don't use every ability at our disposal to counter those frailties and weaknesses and mitigate our bias as much as is conceivably possible, we will lose whatever fleeting chance we ever had to portray a world with some level of genuine honesty.

When writers ignore truth, play favorites with facts, or engage in spin, the result is usually pretty obvious.  Didactic literature is all around us, and it usually comes off as disingenuous and dishonest as you might expect, as any non-objectivist who has ever read Ayn Rand can attest to.  Characters become a distortion, falling into the category of paragons either of "how it ought to be" or "everything that's wrong with the world" and a main character who is less on a hero's journey of self-discovery as they are simply taking a tour through the various arguments and learning who the "good guys" are. That's not truth.  That's just High Medieval morality plays without the names like "Faith" and "Prudence."

And here's another thing about writing and the truth with regard to character--the minute you start to censor ideas because "that might not be good for the X cause," you're in trouble.  Whether you are afraid to have a female character show unfeminist weakness, a rough and gruff protagonist make a rape joke, or a story of a gay high school student wondering if he's bisexual NOT end in a lesson that bisexuality is okay (all actual examples of people upset at writers) because of the larger message that such a portrayal might convey, you are in big trouble.  A writer has to be able to be honest about the places in every one of us that we don't talk about at parties.  The moment your idealism is more important than being honest to the character--despite their flaws--truth is in the backseat and ideology is driving.  And that's when you can't handle the truth.

A writer has a higher duty than that.

A writer has to be better than that.