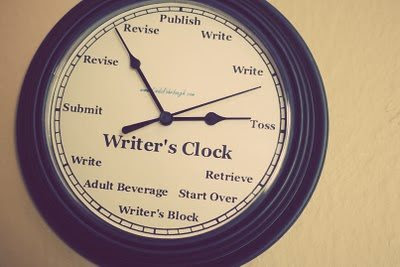 I almost posted this last night (this morning) at 1am so that it would "technically" be yesterday's post; however, earlier this week, I actually discovered that posting after midnight could affect my page views, so it'll just have to go up today. I'll have to just suck it up and do better next week.

There's been a lot of schedule drama these last six weeks or so here at Writing About Writing, and I want you to know that I'm working on a weekend filled with good content instead of so much meta navel gazing. What began as a quest to find a little more time to work in some fiction has transformed into the biggest overhaul I've done of my writing schedule since I started blogging. Believe me when I tell you that I know this blog isn't called Writing About My Scheduling Difficulties. It's definitely become tedious to me too.

However, I would like to make one point in my defense. To quote a Jeff Goldbloomism: "If, uh, if I may..."

This blog exists not only for it's outrageously hilarious entertainment, invaluable writing advice, and redonkulously cute writer.


It also acts as a real time example of what it means to be a writer. You can see the improvement writers can make by writing every day if you read how rough some of my earlier entries could be. You can literally watch my skill growing over an almost three years (wow!) arc of time. You can see how it takes years of effort pays out with a slowly, steadily growing readership. Slowly you go from having to choose hookers or blow once every couple of months to getting to do both every other month or rotate one each month, to finally having a modest monthly budget.

And lots of writers struggle with time. There are very few writers with lives so idyllic that they can easily find the time to write. A small handful who have carved out enough of a life that they need no editing gig, day job, massive schedule of self promotion. (Though even they must stand vigilant watch against the encroachment of "other stuff.") Most writers have to make the time to write. So when I have a huge months-long crisis, I want people to know that this shit is not as easy as we sometimes make it look.

On good days we're falling with style. On bad days we're lying in our own feces, crying, and wishing that there could be three more hours in the day.

Supportive Girlfriend has actually been my white knight through the recent chapters of this massive rescheduling. I wrote about my issues with Fridays last week, and it seemed like I was going to have to basically give up all hope of any social life...at all....ever and simply write in the evenings, but she swooped in with a plan to have The Contrarian taken care of on Friday afternoons, so that I can keep my schedule of naps from getting wonky. That gives me a little leeway in the early evening.

I've worked out a couple of other hiccups in the monthly schedule, but I think I have answers to them. Some don't even involve spending late nights digging holes in the backyard for the bodies.

One thing I'm announcing as of today is the occasional return of the Brunch Post (that's a second post in a given day, usually of a "less important" topic). When I first started brunch posts, I tried doing two posts a day and it wasn't good for me.  Specifically it wasn't good for me not having tearful breakdowns and doing bath salts recreationally. Some of my best fans couldn't even keep up with the alacrity with which I was spewing shit all over the cyberverse. So I vowed to focus on quality over quantity and never do more than a post a day.

Well that's not quite working either.

In particular the monthly book polls are taking up a lot of days. If I do a poll, a reminder to vote, and a poll result that's sucking up three posts when I have the monthly schedule worked out down to the day. And in a month like this one with semifinals there would be nine posts cannibalized by all the various polls, results, and reminders to participate. That would be like a third of the month spent just on the book poll posts.

SO...starting today (and actually today will be the first example) I will go back to very occasionally posting a second post in a day. However, unlike my previous madness, it will basically only be related to the month's book poll, and only once in a while.
at November 14, 2014