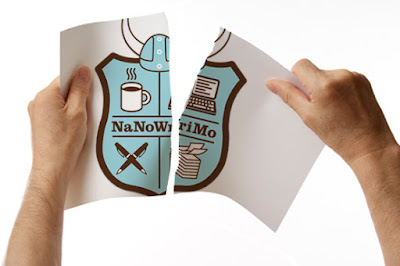 I don't. My opinion is much more complicated.

I know the internet is where nuance goes to die, and people become super stabby fucknoodles when it's their sacred cows receiving anything but adulation, and that NaNo is basically a cult that you can besmirch at your own peril, but sometimes the feedback on this issue really makes me wonder if people have done their due diligence before returning fire. I mean people will read the one viral article I've written about Nano, which might as well be titled "my problems with Nano," and literally write me to ask: "what's your problem with Nano?"

I get that single articles go viral without necessarily the context of a broader body of a writer's works, and that people will respond to that article without knowing that I write from the persona of an evil version of myself that lives in the basement and loves Nano (by the way if that metaphor is too much for you, I'm not sure what to say). But I often give advice about how to survive the month.

Like 15 bits of advice if you're doing the event.
Or like what to do in the week or two right before.
Or how to handle it when you're in week two and the bloom is off the rose.
Or some writing exercises to help you decide what your pace is going to be.
And some last words of wisdom right before you start.

And even though I have answered this question, or questions quite a bit like it, a couple of different times.

And even though I have a "Nanowrimo" tag that goes to all these articles, and a search bar where one could punch in "Nanowrimo," and the "recommended articles" at the bottom are other Nano articles I've written, I still pretty much expect no one is really going to read beyond the one article.

And yet I'm still confused. Even if people are just reading that one article and not the comments, it seems like rudimentary reading comprehension skills are eluding most commenters. How exactly, with the exception of not having read fully, are people unaware of such things as:


So if you're not just some random Nano zomboid fanatic whose sphincter tightened in rage as soon as you read that the title of the article wasn't "NaNoWriMo is the best thing since threesomes WITH sliced bread!" If you read more than the title of the sections (and maybe some picture captions). And if you are capable of handling the fact of professional writers glancing sideways at your precious, let me try to answer this

However, I wrote that article because my opinion was specifically solicited, and I know too many damned good writers who NaNo has broken. I'm not just trying to pinch out a fat deuce in people's sandcastle. I actually don't think NaNo is neutral in a zero sum game. ESPECIALLY to inexperienced writers who are putting all their eggs in its baskets.

Look, trust me. I'm the biggest fan of people just writing for writing's sake that I know. I tell people every day not to worry about getting published, getting paid, getting famous, getting threesomes, getting anything, but to just WRITE because writing is fulfilling. And I'm also the guy telling you to write every day, even when it hurts. The circumstances in which I suggest anyone not write are few and far between and highly context dependent. If I did not know HUNDREDS of writers who tried and failed NaNo's breakneck überpace and then became despondent, burnt out puddles of self-doubt because they were convinced a "real writer" could pump out 1667 words a day and clearly they weren't such a real writer*, I might have more of a laissez faire attitude. If I didn't know publishers and agents who got thousands of manuscripts in December, I might think that the writers weren't ignoring the revision process of writing. If I didn't see literally thousands and thousands of "writers" who do absolutely no writing outside of November. If I didn't see the harm the event did, you bet your ass I would suggest that everyone at least give it a try because why not?

But there is a why not. And if you ask me, I'm going to tell you what it is.

Seriously why is this so damned common:

*Days in the last year I have pumped out 1667 words: zero. (And I make real money at this and am read by thousands, so this is not the mark of a "real" writer.)
Posted by Chris Brecheen at 4:03 PM