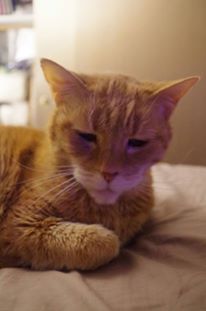 If you peel away the first five or six years of my existence (when my memory was pretty sketchy), I've had a little orange friend with me for nearly half my life.

I first met her in 2001. My ex spouse had left me for the second time and this separation involved several months, so I was living on my own. My coworker approached me and asked me if I wanted a cat.

At the time she went by "Mercedes" and had a bit of a reputation for being loopy and overly energetic. "That cat is crazy," was an oft uttered phrase when she came up as a topic of conversation in the service area. She'd passed through three other owners, including two of my co-workers who just couldn't hang with her...exuberance. I wasn't particularly excited about having a pet at that time either.

But then my coworker explained the situation. She was pregnant. (The coworker, not the cat.) And the man she was pregnant with was abusive to Mercedes. Not just unpleasantly anti-cat or callous. He was downright sadistic. He would smack her around. Put her out on the balcony and dump a pitcher of water on her. Chase her under the bed and reach under it for her, and if Mercedes scratched his arm in her terror of self-preservation, he would pull up the whole mattress up, grab her by her scruff, and toss her into walls. He was never in a million years going clean up the cat box after her. And with my coworker pregnant, she couldn't risk getting toxoplasmosis. Would I please take the cat?

[Edit to add: a number of people have asked me about this relationship since people who abuse animals seldom stop with animals. I'm happy to report that she got out of that situation and is with a great guy now.]

She was an orange tabby. Female tabbies are pretty rare...kind of like male calicos, but she defied the odds. In more ways than one.

At first, I was not thrilled. She shed her white and orange fur all over my new black futon. She scratched up the leather recliners that were on loan to me from a friend. She bolted around the house at all hours meowing like she was in combat with nine or ten invisible rabid wombats. And she was anxious from her abuse. She wouldn't really let me pet her, and if I so much as sneezed she would run out of the room in terror. Skittish beyond functionality. I found food in weird places and the water dish knocked over. And she kept knocking shit off of high places.

I had made a huge mistake saying yes. I was not ready to be responsible for anything, let alone this unholy orange  I even asked about seeing if the coworker would help me rehome her.

It was the third or fourth night when I fell asleep in the couch form futon without pulling it out into a bed. I drifted off feeling vaguely sorry for the train wreck my life had become. Long after I was sound asleep, in the deep quiet of the wee morning hours, I felt a tiny body curl up into the small of my back. If I moved, she bolted. If I reached out, she bolted.

The next day it was as if nothing had happened. She was gone with my first morning twitch and spent the day caterwauling through the apartment at cheetah speeds. But the next night she jumped up sooner. And the next morning she left later. Four days in, she let me pet her. At first it was a gentle touch, but within a few minutes, she bunted my hand for the first of about a gazillion times.

She was a cat and I was a person, but slowly we came to some kind of detente. She stopped running around late at night. I calmly picked up after her whirlwinds. She never really warmed to being in my lap, but she was always curled up next to me. She learned I would never hurt her, and her jerkiest moments of jerkitude barely got a raised voice, and in return she stopped running out of the room every time I shifted position or sucked in breath to cough. Eventually the tiniest touch would get her purring. I leaned in one morning–something that would have spooked her earlier–and with her eyes barely slitted in trust she extended her nose towards me. 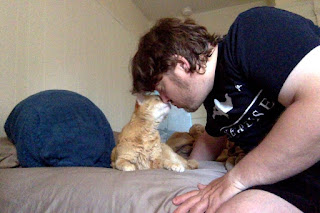 "I found someone who might take her," my coworker said the next day.

She decided she needed a new name for her new life. Obviously I had nothing to do with such a decision, but Mercedes would simply no longer do. The high energy, bullet dodging, jumping and leaping exploits of Princess Mononoke from the Miyazaki film decided her name almost without my help. I was watching the movie. I looked over. And she nodded in agreement.

Of course as soon as she heard she was a princess, she decided it was time to act like one. And of course that had nothing to do with me spoiling her. Nope. The Mononoke part was mostly remembered as an afterthought as she demanded most of the bed, dinner exactly when, and my loving attention no matter what I was doing.

Jumping onto my computer and lying down on the keyboard while I was writing was a daily occurrence.

She always seemed to know she was orange. She would always sleep on blue things that brought out the orange, and she actually acted sort of unimpressed before by other things that were orange even knocking over cups and such. The oranger something was, the more she hated it, and the bluer it was, the more she wanted to be on it as much as possible. It became a running joke that she would not suffer anything that failed to acknowledge or dared to upstage her Royal Orangosity. Acknowledging how orange she was became sort of a thing, and my friends humored me her. 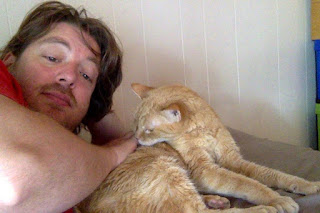 Her kitten energy wouldn't last forever, but there were bird heads aplenty at the threshold while it did. After she shifted into cat middle age, there were cranky meows when I would come to and fro, turn on lights, get into bed. Anything that disturbed her got me a cantankerous "Meyehhh." But as irascible and crotchety as she got, she always booped my nose, curled up next to me, and started purring.

Seventeen years we kept each other company. Partners came and went. Friendships sparked and died. I quit my job as a manager of restaurants and went back to serving, then quit that job too. I went to school and got a degree. I became a teacher. I started writing in earnest. I started getting paid to write. Homes were moved into and out of. I was asked to leave my family and moved out. Through it all, we were each other's support. No matter what happened, eventually we'd boop noses, curl up next to each other, and she would purr while I scritched her cheeks and pet her back. 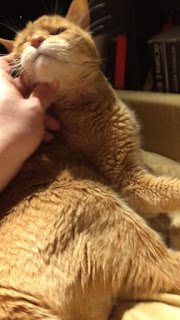 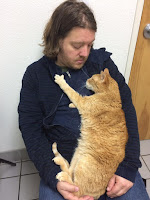 The kidney disease made life harder. There was more routine. Longer instruction manuals for whomever watched her when I was out of town. Lots of concern about getting enough water.  But she was actually doing quite well for how long she'd had it. That is to say her blood panels looked pretty good when I took her to the vet two weeks ago. But she was not actually doing quite well.

All the water in the world added to her expensive special diet didn't stop the tumor behind her eye. Steroids gave us another couple of weeks, but they just reduced inflammation. Cancer's inexorable march was only postponed.

Or as I like to think of it, she saw that our new president was an anthropomorphic cheeto who was even oranger than she was, and that was simply not okay. "Fuck this shit," she meowed at his orange countenance. "I'm out."

We talked that last day. Not long, for there was some urgency, but for an hour or two. I told her that we found each other broken and we helped each other heal, but also that my scar was always going to ache without her. Cats like to hear these things about how they'll be missed, you understand. I wasn't being maudlin or anything. Purely for her benefit. 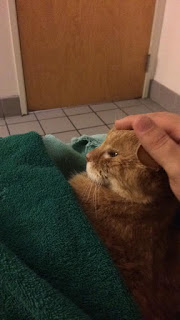 But then it was time.

I tucked my breaking heart into my pocket, and held her through her last journey.

The weirdest things totally get to me right now. The quiet. The gaps. The spaces between. I miss the nose boops and falling asleep petting her purring body, but it's the tiny moments of null energy that thunder through my heart.

Shutting off the lights in my room to leave, I thought to myself that I should leave one on for—

Saturday I walked into my room and no one yelled at me. You know....for having the temerity to open the door.

The pressure sensitive cat bed (that I swore I'd never get) sat on my bed (where I swore I would never put it). Her food was uneaten in the bowl next to the door. The thought that I need to fill the water bowl and clean the box turned into a lancing ache.

Getting into bed and not hearing her objecting "Meyahhh" that I'm shifting her sleeping zone.

The quiet is the loudest part.

You were a very good girl, Princess Mononoke. You brought light and joy to half my life. You were my cat.

And you were very, very orange. 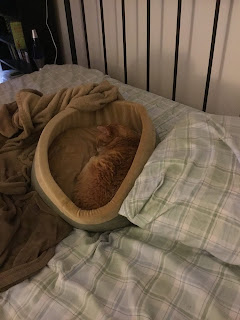