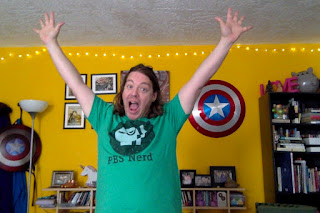 Apologies for the day-late post. I spent all goddamned day yesterday running around after Blog trying to get it off of rooftops or balconies or even those low brick walls that surround playgrounds in civic parks where it was singing the "cartoon-character-falls-in-love-with-another-cartoon-character" part of Tchaikovsky's Romeo and Juliet Overture.
Which is a bit weird seeing as it's an instrumental piece.

Normally Tuesdays are for guest blogging*, but we pause for a moment to bring you a couple of those amazing milestone moments and give them a wave as we pass by.

First of all, yesterday at about 11am, my Facebook page for Writing About Writing tipped over to half a million likes. Half. A. MILLION. Surely there are bigger pages out there (lots of them), but not a whole lot of them are author pages from anyone who isn't a household name.

"That's not a Wheaton," I replied, shaking my head.

"Half a million. That's totally a Wheaton," Blog insisted.

"WE have a Wheaton....even though that's not what we have."

The other thing that happened, probably about four days ago based on my analytics, is that Blog quietly slid over the three million mark. Three fucking million people have clicked on my blog. I know not all of them read an article, but it's still amazing. Roughly the same number of people that fill the city I look across the bay at when I drive through Tilden Park to beat freeway traffic from Lafayette to Berkeley.


I can't thank all of you enough. I know readers come and go, and some have hipster glasses and like "my older stuff better," and others just rage click when they disagree with the title, but it's still an amazing couple of milestones to pass so early in the journey. At least one person has emailed me for the dozenth time to remind me that I still owe a conclusion to my Skyrim article and they refuse to read another word of anything else until I conclude that.

But it is still humbling and inspiring to remember that I started this blog only five years and change ago as a real-time, real-world example of how to (or at least one way to) launch a career in creative writing, and It. Is. Happening.

And it is happening because of all of you. Thank you all so much.


"Five million by the end of the year, right?" Blog asked after I had stopped the latest attempt to climb up onto a kid's slide to sing Tchaikovsky again.

"That's a LOT," I said. "Somehow I doubt it, but the way Facebook is growing, who knows. Some of those older posts are getting thousands off a rerun."

"That's the power of the Wheaton," Blog nodded.

"You should promise some wild shit to generate buzz."

"How about I just write harder and better?"

"The power of Wheaton compels you."

So now, in honor of the post I once made in my second month when I had broken an all time record of twenty (that's right TWENTY!) pageviews, here is the same Hugh Grant dancing post. Along with my personal promise that I will (*gulp*) reproduce it (or a practical facsimile involving me dancing) if we hit 5 million before the end of 2017.