So here's the current situation:

I'm about to head over to Ikea and purchase a number of their sturdy, but inexpensive tables. (They're called Lack if you're curious and they're only about $8. Which is good when, like me, you're on a budget.)  So what I was going to do is purchase a number of Lack's–right now I'm thinking maybe as many as ten or fifteen. I may have to make a number of trips because I'm currently only driving a little Prius C, and it will be limited to four or five per trip.

It'll probably take me a couple of hours to get them all built. They're not as tough as some of the stuff (the chest of drawers I built looked like I was assembling an orbital laser), but they'll still take me a bit per table.

I'm going to set them up next to each other. I haven't decided if I'd rather do a row or more like a circle around myself. I'm still sort of gnawing at the details there.

And then I'm going to flip them. Every goddamned one. Because right now is so table-flippingly annoying, oh my fucking god! There aren't enough tables here. I'm not sure there will be enough at Ikea.

Flip all the mother fucking tables.


I'm typing furiously in the parking lot of a McDonald's and pretending that I don't see the manager giving me the hairy eyeball every time he comes through the parking lot because he knows EXACTLY what I'm doing and I haven't ordered so much as a cup of coffee.

Internet at the place I'm pet sitting has gone out as of last night around 8pm.  Normally I would just take it as a sign from the universe that it's time to focus a lot more on my writing and use my phone as a hotspot when I have something to post. However, this particular job is one of those swanky houses with a pool and a view that is way up on a hill, so my phone doesn't really get signal there.

So normally in THAT situation, I would just make sure all the animals are okay for a few hours and head out to the library for a solid writing shift. After all, I'm pretty clear that pet sitting is not 24 hour supervision (unless that is actually the service paid for) and I have other jobs/plans that I'll be doing during a typical gig. However, the dog I'm watching this week is pretty high maintenance. I don't want to leave her (or put her in a crate) for that long.

So I'm kind of off the grid for a bit–except maybe if/when I can steal away for an hour or so.

What that will mean for blogging depends on how this week unfolds. I may be able to just pop down the hill to the library once a day for a short visit, post something I've already written in a word document, and you'll hardly even know how annoying of a time I'm having up here. But it also might mean that I miss a post or three this week and then have some EXTREMELY awesome posts when I get back to wifiland. The content will be the same either way (and is still ramping up from the summer school schedule). The schedule just might be a little messed up.

I feel like fucking Doctor Claw. Next week will be awesome, Gadget! NEXT TIME! 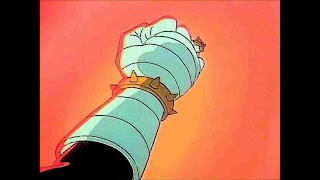 I haven't seen Mr. Manager for a hot minute, so I'm going to attach a cheap and easy didactic lesson to this moment. A lot of writers hit a speed bump and say "WELP. Can't write today!"

The thing I hear most from writers who I admire and love and read and want to be like is that when something goes wrong, it's annoying, and maybe even makes for a good story, and might slow them down or fuck up the blog post for that day or something, but they keep writing. Even if they have to use pen and paper by candlelight, there's just something about that process of amalgamating images and emotions into words that they look for any way to Macgyver a solution instead of reasons they can't.
at August 14, 2017