When I say Write Every Day....(Personal Update)

Remember that writing every day can be a grueling session sweating out a few words on your work in progress, but it doesn't always have to be.

There's a part in "On Writing" (the one by Stephen King) where he talks about letting his son stop playing saxophone. Not because he didn't pull it out and practice like he should (he did), but because he didn't ever cut loose. He didn't jam. He didn't keep practicing after time was up. He didn't add a flourish to a piece of music. He just didn't seem to enjoy it.

I sympathize a lot with this actually. I stopped enjoying band when I switched from trumpet to trombone, but kept at it for two and a half years anyway.

A lot of people want to be writers. Even if I somehow didn't know this on principle, a casual glance at my inbox would make it crystal clear. Oddly enough many don't seem to enjoy writing very much. It is more like a burden, and if they do it at all it is similar to the obligation of saxophone practice.

I'm in that moment between a lot of blog-centered admin work (like new update schedules, guest blogs, and a poll where I need to sift through a gagillion nominations) and ADD decided to make today extra punchy for me. And so today sucked. It sucked hard. And not in the good, eye-contact and perfect friction kind of way.

But...give me one didactic moment of pez dispenser shaped wisdom here. At least as an allegory. 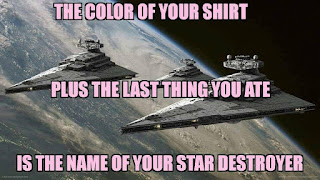 I still wrote. A lot. Creatively. For HOURS. I put a post up about "The Name of Your Star Destroyer" and spent the day responding to people's replies with the ill fated destinies of their various ships. It was fun. It was silly. It distracted me from work at first in an annoying way that I had executive dysfunction about and kind of couldn't stop but then in a "might as well enjoy it since I'm not getting anything done thanks to you fucking brain weasels" way.

But here's the money shot, and there's no getting around it: it was writing.

It wasn't literary. It wasn't my best. It wasn't anything I would stick with a magnet on the refrigerator. (Okay maybe the one with the rainbow pineapple.) I'm not going to turn it into a short story. There will be no novelization. But I still did some writing. I flexed my creative muscles and had the athlete's equivalent of a jog around the park to stay in shape.
Writing every day is one of the most ubiquitous pieces of advice successful writers give and one of the most resisted by those who want to BE writers. And maybe it might help to know that every single day doesn't always have to be ten pages of your magnum opus. It'll be there tomorrow.

Today's post will not make "The Best of." It will disappear quietly into the night with a hundred other "personal updates" that don't involve death or disease. It is filler slapped up on a tough day. If I did a thousand more like it, I'd lose all my patrons and be eating ramen without the flavor packets. What I did do was more akin to skipping practice to ONLY do a cut-loose jam. But even today–a day I can't seem to bull-ride my brain into more than a few minutes of haphazard wordsmithing–has involved hours of writing...just for fun.