How do I fricken START? (Mailbox) 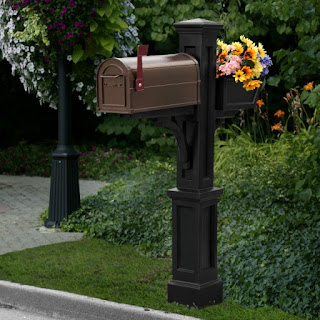 How do I just. Fricken. START?

[Remember, keep sending in your questions to chris.brecheen@gmail.com with the subject line "W.A.W. Mailbox" and I will answer a couple each week.  I will use your first name ONLY unless you tell me explicitly that you'd like me to use your full name or you would prefer to remain anonymous. Minor surgery may be done to sensitive questions so that my FB page commenters aren't invited to give harmful advice.]

I have a story I want to write. It's epic in nature, and stems from a series of delusions I had (for which I'm now taking meds), where I believed I was part of a greater purpose to create, or become (that is the question), infinite beings, that started at the dawn of man. It comes from a basis of "what if all mankind was an evolution that was the source of 'purpose'".

That being said, I follow your page for the sole purpose of motivating me to start, but to be honest my ego, which I need to do this, is dwarfed by the extreme talent of the great successes of our lifetime.

So what I would ask is, how do I start? Mind you, I've started numerous times. At least 20 beginnings to my story have been deleted in my absolute disgust. So I think maybe a new strategy is needed. Should I create characters first? Bullet point story trajectories? What should I do?

I'm going to do a slightly reworded version of your question for the preview text of my social media just because a lot of folks start giving advice without reading the article, and sometimes it's really bad advice. Which is fairly low stakes when they're advising someone not to write every day or that there's no need to read that much. Particularly I don't want anyone giving you unlicensed medical advice regarding your psych meds.

Let me bust out my thick Austrian accent and cigar. "Tell me about your mother...."

Writing is so intrinsically tied to thinking and the troubles we have with writing so often troubles we are having with the way we think that if I had the opportunity, Ben, I would actually sit down with you for a few minutes and ask you a handful of questions, not unlike a therapy session, to try and narrow down what it might be.

So often our writers blocks can be health problems, sleeping issues, malnutrition, and all manner of psychological blocks. While I can sit and write almost regardless of circumstance (because I've been doing this a very long time), the difference in word count when life is relatively hunky dory and when, say, I think someone I love is really angry with me is almost a factor of ten. I experienced one of my worst writing times in the early 2000's when I was in a relationship that I didn't know at the time was emotionally abusive and involved a coercive sexual dynamic (where I was having sex to avoid the tearful fights that would inevitably happen if I didn't have the sex). It was only weeks after our break up that the words began to flow again. Since I've gone professional with writing, one of the most profound difficulties I've had writing more than just a blog post (often with a mighty heaping spoonful of jazz hands) has been because of the intense anxiety over our current political climate.  Certainly not every psychological problem causes a block (indeed, some seem to facilitate writing prolifically), but almost every block has a psychological source. 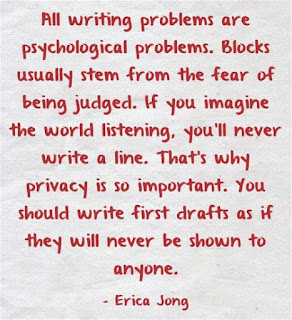 However I think you've let a couple of things through in your question that I can pin down and work with. I honestly think you nailed it in one when you mentioned your ego's role in this. I might have gotten it from the clue of you starting over so many times or the worry of the greats that came before you, but most of the Blues Clues in your letter are pointing in that same direction. And I brought my big blue magnifying glass.

You're afraid that it's not going to be good enough. Which is not to sound flip or dismissive. That's a reasonable fear for any writer. It's one we have to get over, of course, but it is reasonable.

While we all need monstrous planetoid-sized egos to do anything so self congratulatory as write and then turn around and put that writing out in the world like it might have value to other people, I think you've got your ego on the wrong side of the equation. Ego might be important for you to keep going and it's absolutely vital when it's time to blow off the stack of rejections and keep submitting because you know your work is good enough, but I also think ego is what's holding you back. Because when you see your own efforts as not good enough compared to others, you quit and start over. Over and over and over again. That's ego flying like a bird into a pane glass door over and over again.

It can be so intimidating to have really good writers out there doing their really good writer thing. And it can be so seductive to compare yourself to those writers and feel that you're coming up lacking. And it's so much worse with fiction. I'd rather do fifty listicles called "Why MFA's, Nano, and everything you love sucks!" and get raked for days by commenters on every continent than post one short story and have someone say "I liked this but the middle seemed a little stilted."

So let me start with a couple of good news/pep talk points:

1) You're comparing your first drafts with their final copies. The writing you're admiring has been through draft after draft after draft and then an editor and then beta readers and then a final editor and then a proofreader, and it is super polished. Yours is just a draft. The first draft. The APTLY named "rough" draft. It will not sound as good and that's just the facts of revision and why professional authors spend probably as much or more of their time RE-writing their work.

2) Every writer is a little bit bored of their own voice and finds others refreshing and exciting. That's half the reason to read prolifically. Other writers do things differently and you want to infuse some of that good Juju McGumbo into your prose as often as possible. But in the meantime, don't forget that they are probably a little tired of their tricks and will find your fresh turns of phrase and favorite words delightful.

Okay, now our Good News Network moment is over. Feeling light and fluffy? Got some rainbows and smily faces? Maybe a couple of unicorn companions who think your name is Charlie and seem overbearingly optimistic?

Great. May it be a light to you in dark places, when all other lights go out.

So now I'm going to put this a little differently and it may sound a tiny bit....hmmm....ass kicky(?).  Meanish? Not super nice and fluffy? Like your physical trainer who takes no shit and calls you Cupcake?

Fundamentally, it means you're not trusting the process––the process says that whatever you wrote is going to go through a dozen revisions anyway and it's not going to look anything like this first page(s) you have now.

You aren't trusting that right now, Ben. You aren't trusting that your story will likely undergo huge tectonic upheaval, that you might not even begin the story in the same place. You aren't trusting that everything is going to change and you will end up revising the first page(s) at least a dozen times. There is humility in understanding how flawed the work is going to be in a starting draft, and a certain level of ego in expecting it to be perfect. Right now, you are trying to get it right in one draft because somewhere in your head you believe that if you get it JUST right, that's that, and until you have that breakthrough moment that it's going to be messy, you're just going to keep sitting paralyzed trying to get it perfect in one shot like you're trying to paint the Mona Lisa in one stroke.

That's not how writing works...not the kind of writing that ends on strangers' shelves, anyway. You could probably get away with it on a listicle if you have 20-30 years of practice.....

You can try bullet point story trajectories and character sketches first, and if those work, the golden rule is always always always to do what works. However, what I suspect is going to happen is that you will start to get more and more pre-writing work done and more and more ornate sketches and outlines, but will still have the same trouble when you sit down to actually do the writing. Here are my suggestions:

1) Stop trying to write something good––something as epic in nature as you once felt. The language can do that.....eventually, but it won't be easy, and it won't happen without several revisions, and in the meantime you have to deal with sort of a four-year-olds crayon version of the picture you're trying to draw. But once you have something (anything) down, you can start revising, so TRY to write something mediocre. Something that just gets the crappiest brushstrokes. You can make almost a game of how mediocre you let it get. Just make progress writing.

2) Quit starting. Forget the beginning, and jump in at Chapter Two. Just get in and put some rubber on the road. You can come back and do the beginning and spend all the time you need making it perfect. You might even find that the beginning you envisioned isn't exactly the place where the story should begin.


3) Officially declare your last attempt your rough draft and write forward from that point by one page per day for two weeks. Forget about the fact that it isn't perfect. Just go forth with your story.

4) If you find even these steps eluding you, I would check in that the habit of writing IN GENERAL is strong.  It's possible you may need to go back to more fundamental basics. A lot of problems with folks starting "Their Novel™" is that they don't really have a habit of daily writing to begin with.

I will say one more thing. It is extremely common for creative folks to have a harder time on psych meds. I am in no way, shape, or form suggesting that you stop taking them, but just know that you're in good company (including me). You may have to pedal a little harder and faster to cover the same ground, but obviously the mental health is worth it.