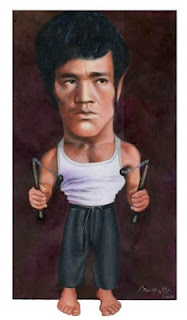 I tend to be a pragmatic person.

You mean when you're not spraying yourself with pepper spray, getting your finger stuck in a drain for 45 minutes, or jumping full speed off a stairwell with a low ceiling and hitting your head so hard that you--and I'm quoting your friend now--flipped all the way over and landed on your stomach?

Shut up evil italics voice.  All those things had...mitigating circumstances.  Anyway, this is my story.

Once upon a time a slightly younger version of me was out with a group of my science and math friends and an argument broke out about whether a plane could take off from a conveyor belt.  There was no way I could follow the science, so I just watched them talking past each other for about a half an hour.  Things got heated, then superheated, and then one of my friends turned into plasma and melted through the floor.

I knew we had turned a corner from lively debate into something much worse when the nutritionist called the PhD in astrophysics a "fucking tard."

Well, the physicist looked at me and said, "Okay, since we're not listening to the physics doctorate about about physics anymore, what does the English major think?"

"I think there would be a conveyor belt airport if it were more than theoretically possible," I said.

My friends got a laugh out of that (largely, I think, related to the number of empty beer bottles on the table between us), and we went on with our evening with no further talk of planes or conveyor belts.

But seriously that was all I had to give.  I understand the problem is one of perspective and there are considerations like the ability of the wheels to go twice as fast as the plane and the length of the conveyor belt or something.  A plane still needs air under the wings for lift or some shit,so it won't just lift off from a fixed position, but it could get the speed it needs in a really short space by rocketing off the end of the belt.  And something about two trains leaving from different cities or something.  Anyway, I'm STILL not really clear on the science, but the point is both are kind of right and both kind of missing something, but in the end, even if it might be possible, it isn't really practical.


Can we expect this diarrhea of the word processor to achieve some vague sort of point any time prior the Aztec apocalypse?

Shut up evil italics voice.  I'm getting there.

I've had similar conversations about exercise.  Being a on again/off again gym rat, people sometimes ask me how they should be working out.  If you've ever had a friend who worked out for more than a month or picked up a fitness magazine or--God forbid, you poor, poor person--asked on a social media for some advice about losing weight, you are probably aware that there are a few...uh....competing theories out there about how best to lose weight.

Not only is every Pilates/Crossfit fad workout going to have its legions of born again fanatics who shamble up to you and desperately want to eat your brains, but just the whole idea of what you should be doing is in contention.  Should you focus on cardio or on resistance training.  Legions of weight lifters have things to say about muscles burning calories, metabolism, and how pointless long sessions of cardio can be.  (They point to all those obese marathoners as evidence.  Oh wait...)  The health industry and another whole legion focus on cardio and burning calories.  Cardio before weights.  Cardio after weights.  Nutritionists, doctors, physiologists, body builders, and even olympic trainers are all doing their best to recreate the Battle of Stirling.  William Walace will be played by Ryan Gosling.  ("Hey Girl....  They may take our LIVES!    But they'll never take our....knowledge that the fashion industry is making billions promoting low self esteem.")


And a lot of people asked me, "Chris, what is the best work out?"  And my reply to that is always the same.  "The one you'll keep doing."

No one asks you for advice on anything body related...except maybe how to eat a lot of pizza.

Please shut up.  This was back before my free time became so precious--back in the before era of the long, long ago.  Back when we had reached the tipping point of the statistical probability that someone who said they hated Black Eyed Peas was not talking about southern food.

I don't care if it's playing squash with a friend, joining a derby league, reading a book while you jog for two hours, lifting weights with your buddy, or doing a Navy Seal workout routine, if you keep doing it, it will work. Unless you're bringing a bag of chips and just sitting still on a stationary bike to watch the free gym TV, if you're going to the gym three or four times a week, you will probably get results.  So if something is fun and you like it, do that.  If something is boring and you hate doing it, you'll probably start to find excuses pretty quickly.

I hate resistance training, and if I give that emphasis in a workout, it's not long before I start seeing working out as a chore that I'd rather skip.  Excuses start rolling in, and then I'm gone.  I also get bored easily doing cardio by itself.  But if I bring a book, I'm happy for hours.  I can burn 1500-2000 calories and not even notice.  A few weeks of that three or four times a week, and you betcha I can tell a difference.  So go ahead and tell me I should be lifting weights.  Tell me ALL. YOU. WANT.

Still, my work outs aren't really the point of this article.

You should tell them about The Megathalon.  ~snerk~

A few months ago I wrote about how a writer really needs to find the time that works for them.  The magic of creation is a personal thing, and someone else's routine isn't for you.   You might do morning writing for a few months because you're employing the techniques of Dorothea Brande, but once you're writing smoothly every time you sit down, you probably are going to notice a time that works best for you.

But this really goes for anything.

I once saw a person writing into a loose leaf folder with a really fancy fountain pen.  "This is what X did," she said.  I can't even remember who X was anymore: Bronte or Austin or Plath or someone.  I asked her if that helped, and she said she didn't like it.  She much preferred to write on a word processor because she could type much faster and keep up with her brain a lot better.  Plus she could go on longer before her hand did it.  Why on earth, I asked her, would you keep doing that then?  "Because X did it."

Standing on formality can sometimes be very, very ineffective though....

Some martial arts you can go learn at the local school are hundreds of years old.  Many come with traditions of culture and etiquette and formality.  You can't even take a class before buying a two hundred and fifty dollar uniform.  You have to do a special bow when you come in.  You treat the Sifu/Sansei  with deference even though we don't treat any other teachers that way in the U.S. You don't learn a punch until you spend hours working on stances.

But many other martial arts are intensely pragmatic.  They have no uniform; you just come in your sweats and a t-shirt.  They have no deep stances; they just tell you not to stand straight on and if you forget the teacher pops you and you sure as hell don't forget again.  You call the teacher by their first name.  They aren't going to stand on ceremony.  They aren't worried about stealing anything from any other form that might be effective.  They are hybrids of five or six forms taking what works and leaving the rest like the raccoons of the martial art world--wily little thieves that get into everything and respect nothing.  They care what works.

Jeet Kun Do is so non-formalized and focused on adaptation and improvisation that Bruce Lee kind of didn't want people to call it a form.  Keysi incorporates half a dozen styles into something that is absurdly messy and looks kind of silly but horrifically brutal, and Krav Maga, of course, is the national Israeli martial art that trains people to kill fifty guys in a room using toenail clippers and the ripped off limbs of the dead and is SO fucking horrific that practitioners often report not using it in fights where no one pulled a knife, crowbar, or AK-47 because the stakes weren't high enough.

These martial arts focus on what works.  They won't say that a straight on punch isn't in keeping with the balance of energies and circular motions of the yin and yang.  They will say "try to hit the bridge of the nose so you shatter cartilage fragments into the asshole's brain!"

This pragmatic approach is what you want in writing.  You want cartilage fragments in the brain! Metaphorical cartilage, of course. In the metaphorical brain. But metaphorically speaking...just like that. Don't get up at four if you don't like getting up early. Don't sit at a desk if you need to move. Don't use a fountain pen like James Joyce did if you prefer typing. You want to focus on what works. You want to focus on what gives you results. And you want to leave the formality and the ceremony of others behind.

Unless of course that formality is what's working for you....then you want it. But make sure it's your formal structure. If you do your best writing in the dead of night after you tuck the kids in and have a wonderful bowel movement, more power to ya.  You can even bow to your fountain pen if you want.

I have conversations about my stories with a wooden dragon I got six years ago from Chinatown; I'm the last person with any right to take someone's affectations away.


So what you're saying is that spending 3 hours a day on Facebook works for you? Also, that you can't fight?

There are some general things that usually work.  Really.  Like writing every day.  And only you really know (really) if something works better for you or if you're giving yourself permission to not work. A lot of people will say "that doesn't work for me" as an excuse not to put in any real effort--guess how their careers are coming along? But just don't be afraid to get under the hood and make any modifications that might help.

Artists need to be pragmatic. About time. About money. About creativity. About energy. About perspective. About everything they do, they can't afford to get caught up someone else's baggage and anyone else's bullshit.

So don't forget with any advice--even with MY advice, as sage and above reproach as it is--don't be afraid to toss it if it doesn't work.